LR: What about other venues?
AY: There was the Black Bottom. I didn’t hang out there, but I went there a lot. Coltrane played there. I saw local musicians there, many, many times, I saw Raahsan Roland Kirk there. They used to have a restaurant in there and they made great food, great southern cooking. That was in Old Montreal, one block in from St-Laurent on St-Paul. Back then, it was actually empty. You would go down there and do acid trips because nobody would bother you. Nobody was there at night. There were some clubs, David the candle-maker was down there, remember sand candles? They had molds and poured in the wax and pulled it out and you’d have sand on it, with the legs… he made them down there in his hippie shop. There was the Boite A Chanson too. There was lots of stuff happening, but you had to root it out.
The McGill Ballroom had some things, I remember the first time I ever saw ‘Walking’—Ryan Larkin’s movie—was on acid in the Ballroom, and it’s something to see on acid! You don’t know if you’re hallucinating or not!! (laughs)
LR: People used to tell us about going out at night and missing the last bus to get back home, and there was this place called The Bus Stop…
AY: The Bus Stop was near Sherbrooke at Guy. There’s that sort of fancy building and when you go behind it, the old houses that are set back, it was in the first greystone in the basement. I spent time there and at the delis, the all-night delis: Ben’s was one, but my favorite was Dunn’s 24-hours, but you needed money. The Bus Stop was when you had no money, because you could just sit there. If you had money, you had yourself a piece of cheesecake and a coffee! 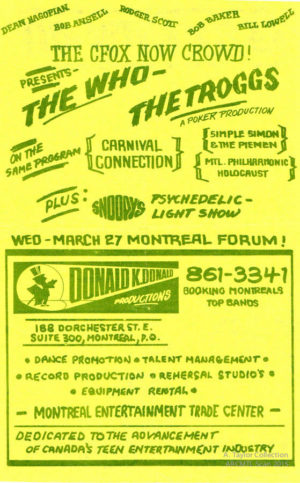 LR: What else about the sad ending of The New Penelope. You must have been sad too?
AY: Yeah! Basically I was in shock! It didn’t really dawn on me until a couple of days later… what was going on. I pretty much knew that I was going to do—go out and find another job! See, jobs were easy back then, it was a whole different thing to go out and get one, at a buck and a half an hour. You would just go out and get work.
I ended up working in the Cote Vertu shopping center, near l’Acadie, which was slightly more built up then, just past the train station. There was a Broasty Chicken, an American company that came up here, I got a job there. Two women owned the place, and every night we drank 48 beers and at least a 40 ouncer of Rye, at least! I stayed there at least a year—I quit or got fired—whatever it was, I ran away! (laughs) It was too crazy! The chicken was great, it was unbelievable fried chicken, they cooked it in pressure, so the chicken came out not greasy. That was in 1970.
LR: But what about the loss of this place where you had your fix of live music every night? What took up its place?
AY: There wasn’t really a lot happening back then. Place des Nations that had great shows for many years after [Expo 67]. The sound was iffy, it was outdoors, and really depended on which way the wind blew, I’m not joking! Records were important.
LR: Where did you buy them for the most part?
AY: Records were $3.98. The Record Centre, that helped a lot of people.
LR: What about daily life? When you got your first place, what was the rent?
AY: My first place, I rented with a friend of mine, I don’t even remember what we paid but it was low. Then I rented a place with Gayle across from where Tepley had his store—that was a 6 1/2—$88 heated and it had a fireplace! It was above Betty Brites [dry cleaners] right on the corner of MacDonald & Decarie. I remember Gail’s reaction when I showed her, she went: “It’s too big!” so I closed 2 doors and said: “It’s a 4 ½ and it’s still $88 a month!” It was right across the street from The Texas Tavern, and next to that was the Galaxy Hotel & Bar. In high school, I remember the bartender at The Texas going: “Eh! Stop coming in here with your school bag!” and I’d go: “Oh! Sorry, sorry!”
LR: So, you commuted from St-Laurent to McGill when you started working there?
AY: Yeah, I took the 17 bus, or would hitchhike, then we got bicycles—anything not to take the bus. The bus was so dreary! I remember the snowstorm of ’72. We started to go to work and Decarie was blocked—we’re troopers!—we walked over to Saint-Croix, get the 16, go through TMR and we ended up walking back home—we got stuck in TMR—that was a good one! There was so much snow that these guys got snowmobiles and went around robbing the banks! (laughs) The cops couldn’t catch them! 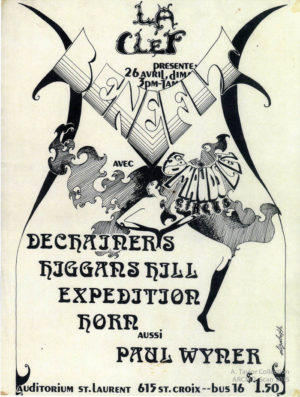 A poster for a 1970 benefit show for promoter Alain Simard (later founder of Montreal’s Jazz Festival) in Ville St-Laurent, from the collection of Alex Taylor.

Allan can still be seen at concerts around town on a regular basis.