LR: Do you remember the shows by the Peanut Butter Conspiracy?
AY: Ah! Peanut Butter Conspiracy, one of the worst bands that ever played the Penelope! Oh my God! They were horrible! From San Francisco, we were a little nervous. They were one of those bands—and I’m there every night—and the second night, it was exactly the same, note for note… We didn’t even talk to them very much. They just came in and did that one show every night, but they were nice people, they were hippie-dips, so yeah! We took them. One of the better bands we had there was The Children of Paradise: Happy & Artie Traum, this guy Eric Katz… I got the poster and the 45 from the band… they were like a folk super-group that lasted for like 6 months. 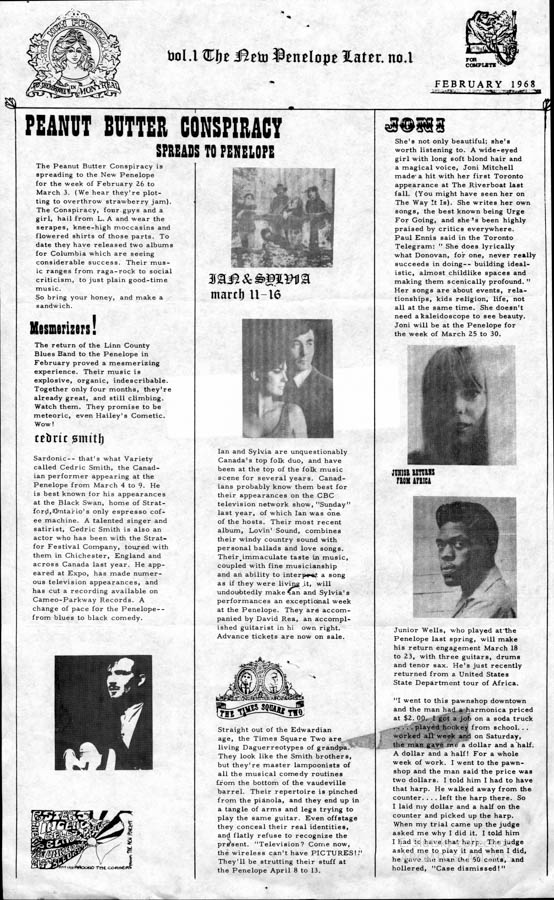 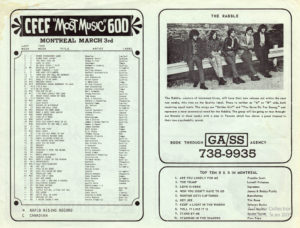 AY: I have no idea.
LR: This was a few months after you saw them in New York?
AY: Oh yeah! They were on tour, it was a long and disastrous tour because through the States, nobody knew them, and they were so fucked up!
LR: Speaking of The Rabble, did you see them live there or elsewhere?
AY: I saw The Rabble lots of times. Pimm has got a great voice.
LR: You didn’t only go to The New Penelope, right?
AY: Well, at that time, I didn’t like The Forum for shows, so I didn’t go to many… [the sound was] terrible, terrible! I forced myself to go see Led Zeppelin twice and you could tell when they changed keys because the place vibrated differently… I saw Zappa in the early ‘70s, there again, the sound was terrible. One of the things about The Penelope, the sound wasn’t that bad.
LR: Supposedly, Zappa was the first act to play two weeks or whatever when they moved to Sherbrooke Street.
AY: Yeah! He was the first act.
LR: Supposedly, he had them re-arrange the speakers and stuff right off the bat.
AY: I don’t know but… I always remember that there was two in front, two on the side, and later on going: “Oh! That’s how they do it!”