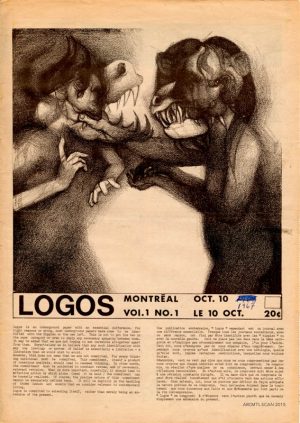 When one considers the earliest days of Montreal’s counter-culture and underground arts and activist scenes, it’s hard to exaggerate the importance and influence of LOGOS magazine. It was our city’s own contribution to the independent press that was emerging across North America, such as the Village Voice and the Georgia Straight. This entirely new publishing milieu gave a voice to the mid 1960s generation of youth that did not hear any of their political or aesthetic preoccupations reflected in the dull, conservative mainstream media landscape of the time.

ARCMTL, the non-profit archive of local independent culture behind this Montreal Underground Origins project, considers its set of Logos magazines as part of the very foundation of its collections of Montreal underground culture. Shortly after it was founded in 1998, Archive Montreal discovered stacks of old Logos magazines in the back rooms of Montreal’s oldest used bookstore, Russelll’s on St. Antoine St., just before it was demolished to make way for the expanded Palais des Congrès. Nestled among stacks of old Montreal newspapers from the 1800s and 1900s, such as the Witness, Star and World Wide, the psychedelic art adorning the Logos covers stood out as a complete break with all that came before it. Since then, it has emerged that just about every other alternative, underground or counter-culture publication that followed Logos in Montreal and Quebec was inspired and influenced by it. 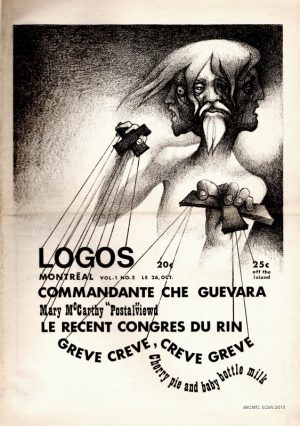 We sat with founding editor Paul Kirby and his partner Adriana Kelder at Archive Montreal’s archive centre in the fall of 2015 to look at old issues with them, talk about how Logos came about and what their experience living in Montreal in that era was like. What follows is an edited version of the conversation, interpolating a transcript of Kirby’s presentation at the October 2015 conference, Contre-Culture: Existences et persistence’s at McGill University, as well as portions of a phone interview with Kirby conducted by our colleagues at Ghetto Mohawk in December 2014 for their special issue devoted to Logos, available to order on their website.

LR: How did you come to be in Montreal in 1966?
AK: I went to school in the Lakeshore, in Beaconsfield. I was born in Holland; my parents emigrated when I was 8 and came to Montreal in 1956. I was going to the Beaux-Arts when I met Paul through my oldest brother Robert Kelder, who wrote for Logos. I was fresh out of high school when I started at the Beaux-Arts, I think I was 19. It was like a four-year college course that I never finished before we left town.
LR: And how about you, Paul?
PK: I arrived in Montreal around ’66. I had gone from the University of British Columbia to North Africa and then back to Vancouver, before enrolling in graduate work in psychology at McGill. I got so disillusioned by the narrow focus of McGill psychology that I ended up becoming good friends with the head of the Philosophy department, having already gotten a degree in philosophy. Another friend was Chandra Prakash, a graduate student in English Literature (later on a longtime film teacher at Vanier College), was very involved as well against the Vietnam war, Palestinian rights and human rights activities in Montreal. We made some proposals to the Liberal government, even met a couple of ministers regarding Canada’s position on Vietnam. We discovered that they were saying one thing in public, but then backing away from any kind of commitment. In the process, we connected with Laurier Lapierre, a journalist at the CBC, hosting the program “This hour has seven days”. It was one of the best television news shows, a fellow Master’s student John Grey was a correspondent—he may have been involved in that radical McGill Student Handbook. The show was taken off the air because it was considered too radical. Anyway, the head of the philosophy department at McGill and myself who brought Noam Chomsky to McGill- he came and talked to the combined psychology and philosophy department.
The speech itself was such an incredibly beautiful academic shredding of 30 years of McGill’s deterministic behavioralism, and very pointedly, the experiments at the Allan [MEMORIAL] with the CIA. It was a beautiful thing to watch.
We had a number of meetings with Chomsky privately, telling him of our plans to gather a bunch of intellectuals and artists and writers, and go and work in the fields of North Vietnam. He immediately pointed out to me would be a Godsend to the U.S. forces, because they would just drop a few bombs and kill all the people that were opposed to the Vietnam war. He suggested we start a hostel for draft-dodgers and war-resisters in Montreal instead, which is what we did. It was called the Gandhi House, down on St-Antoine at Atwater, we set it up in conjunction with a man by the name of Nardo Castillo.

The draft dodgers were actually quite a small community and, you know, it was difficult at the time to find any English-speaking Montrealers that were against the war. Over the period of like six months there was probably around 100 people that came to Montreal as war resisters. A lot of them were artists, photographers, graphic designers, and writers who, for various reasons, were coming up to Canada to resist the war or to escape the clutches of the draft system. These became the nucleus of the people that eventually became the Logos community.