You know, in your dreams you think, “Oh, this is going to have a huge, significant impact. It’s going to change things”. But we didn’t anticipate, in our wildest imagination, that they would really go across the country with the news. I got a phone call from the Gazette reporter Phil Winslow. They had just broken up from the meeting that the publishers had called about this, and he had gone by a desk and they had police scanners. He said, “Get out of there! They’re coming! They’re coming to the Logos House!” So we all packed some stuff and ran out. Adriana and I went to a friend’s apartment about a block away, and the rest of the people just disappeared into other people’s homes. Then the police arrived, and according to the neighbours, they came up in a lot of cars with all their lights blazing and guns drawn, and just started smashing doors down. There was a reporter from some radio station who had pulled up just before they had arrived and they almost shot him. It was that close. He had to duck down and scream that he was a journalist.
And it went on. Every hour, we were at the top of the news. “Paul Kirby and his lover, Adriana Kelder, are in hiding.” Actually for the first five or six hours, there were of course, rumours that we had crossed the border. A lot of this we didn’t find out about until the trial, which was a year later. We didn’t realize the extent of what we had actually created until they brought all these people in to testify at the trial. It was quite illuminating to hear all these stories and realize how much we had pushed their buttons.
AK: He came to the trial, Drapeau. 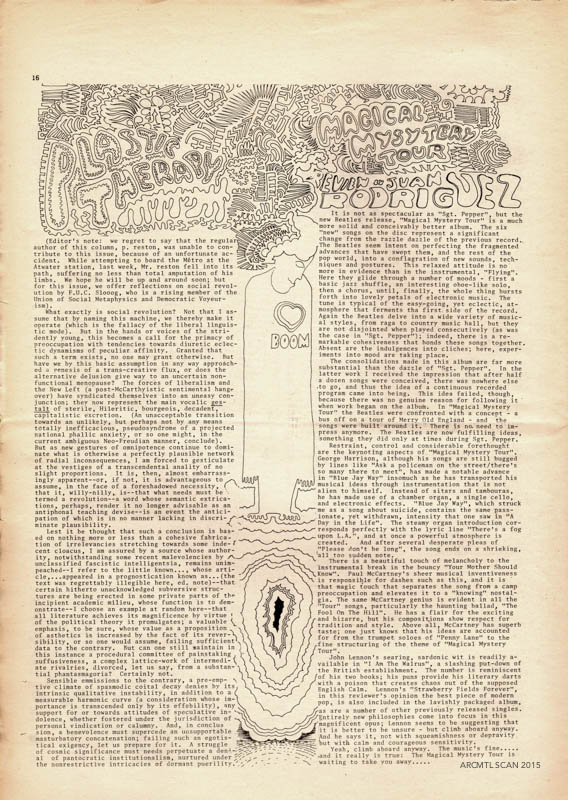 PK: Yeah. He had to prove that he wasn’t dead! (laughs)
Before we were sentenced, there was a number of other trials going on, as I mentioned. We were already charged with two counts of publishing obscene material and about 35 counts of selling a newspaper without a license on the street. Even though the lawyers were doing everything pro bono, for free, we still had to raise money because there were court costs.
So one of our people from England, his name was Julian Harding, he informed us that he knew somebody who knew somebody who could get to John Lennon. They had just made the film Magical Mystery Tour and it had only shown on UK television. So us together with three or four other people made a presentation to his friend to get to John and ask him for the Magical Mystery Tour film so we could show it in Montreal and use it as a fundraiser for all these trials. Lo and behold, one cold winter morning, there was a knock on the door at the Logos house. This guy hands us a big package, a film. So we took it inside and opened it up and there was a note inside saying, “Paul, and Nans, and Logos, good luck. Stay out of jail. Your friend, John.”
It was great, but you know in those days, there were so many people that we were connecting with. The world hadn’t evolved into this disingenuous worship of celebrities. So we just took the note and said, “Oh, that’s really nice,” and then we threw it in the fire. And then we proceeded to make plans to show the film at Sir George Williams, McGill, and at University of Montreal. It took us about two months to organize all the showings, I think we did four or five nights at each university, and we made enough money to keep the lawyers happy and put out a last issue of Logos.
LR: 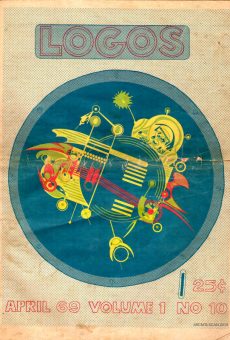 Did you mail them, get a lot of subscribers through the Underground Press Syndicate?
PK: We had a distributor in the United States and he would come up and pick up 10 000 copies, I don’t remember, but that was only at the end. Prior to that we used to mail copies to bookstores in New York, San Francisco, Los Angeles, Chicago, Detroit and on and on.
LR: Did you ever do a trade or receive from The Village Voice or…
PK: We did. We started a distribution service called Polis Germinations and we ended up distributing almost all the underground papers, the Berkeley Barb, and we became the distributor of Rolling Stone.
AK: As soon as we started making money, we left!
PK: Rolling Stone was just a small magazine at the time. It was right around the time when my trial was over, which was in July. I was convicted for sedition, and also I had put up a peace bond with the city, so we couldn’t do anything, so that’s why we left. We turned Polis Germinations over to one of our people, Charlie Castillo. At the time he had a whole family connection in Lachute. He and his partner were selling thousands of copies of Rolling Stone, and of course the other stuff was selling too, but nowhere near as much… The War Measures act was enacted and the next night, or two nights later, at 3 in the morning they woke with cops standing around their bed! And they had to walk in through about four feet of snow ‘cause he lived in a little old farmhouse and didn’t bother shovelling it. The cops were so pissed, they just grabbed him and took him down to the Montreal police station. Then they found out that he was a draft-dodger, even though he had Canadian residency, they took him right to the border and he spent a year in jail. 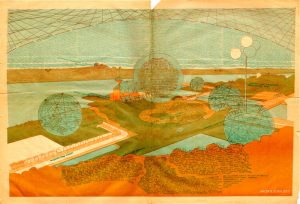 Apparently there have only ever been two people charged with sedition in Canada. So I’m one of the two. Fortunately I had a really good lawyer by the name of Morris Fish, who became a Supreme Court judge in Quebec in 2003.
Time Magazine wrote an article about it—a number of magazines did—it became an issue of freedom of the press, and that was our whole raison d’être. We were advocating freedom of the press, fully! And under no circumstances could we be banned because it would be a restriction of freedom of the press, so that was sort of our cause all along. Montreal still had quite a strong leftist, socialist, old commie scene. It started in the ‘30s and Dorothy Livesay, she was quite a good Canadian writer…
AK: …and Irene Kohn… 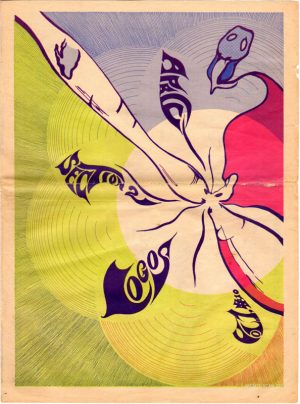 PK: She became a very close friend, they were all connected around the National Film Board, and specifically around people like Norman McLaren, who was a very political guy. They were all very supportive of Logos and became patrons of the paper. It was a pretty strong scene of people who were young and vibrant and active in the ‘30s, so by the 1960s they were in their sixties. Then there was also a bunch of people that came with that whole Soviet development, and Irene’s father was the first ambassador from the Soviet Union in Canada, and then it evolved into camaraderie with the civil war in Spain, and as a result of that…
AK: Norman Bethune.
PK: Yeah, he was sort of key to that whole thing. He lived in Montreal and he had many lovers but Irene Kon, who was our friend and supported the paper, was one of his lovers. There were also a lot of Spanish anarchists around the Spanish club.
Anyway Morris had been drawn to our case in all of this support we had, but in the end basically told us that it was pretty well a lost cause, but he wanted to take it to the Superior Court and so he did. I was eventually found guilty and I was given a 2-year probation sentence, or suspended sentence, and I had to put up that peace bond.
AK: $1000? 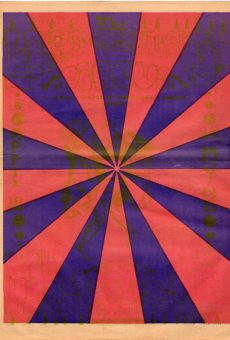 PK: It was so ridiculous—a peace bond!
LR: Were there any rallies or public events?
AK: Well, that’s when we did our first Lord Maudsley Circus…
PK: Yeah!
AK: Performing arts…
PK: That’s a whole other story.
AT: Did you know those Lord Maudsley people personally?
PK: Yeah—That’s us! And that’s what started the caravan. That was the transition.
AK: Wasn’t Lord Maudsley a dog?
PK: Lord Maudsley was a dog that we had in Vancouver. Myself and a couple of other people lived in a really great place in BC, outside of Vancouver called Deep Cove. It’s where Malcolm Lowery wrote 5 or 6 novels. He was one of those ‘50s novelists who drank himself to death like many others.
LR: Where would you have held an event in Montreal?
AK: The Moose Hall, on Park near Pine, is that still around?
LR: When you actually had to leave, was it a midnight move?
AK: No. We had to fix up our Volkswagen bus/van. I was pregnant and wanted to go before I gave birth.

Paul and Adriana had already begun planning a new caravan – travelling performers type project by the time they left Montreal. Adriana had grown up in the West Island in the 1950s when it was possible to regularly go horseback riding at one of the stables that still dotted Cote Vertu West and St. John’s Boulevard. A film about their early days with the Caravan was produced by the NFB (Horse Drawn Magic, 1979) and you can keep track of their current Caravan activities on their website here and their Vimeo channel.
Logos Magazine continued after their departure with various editorial teams, publishing until 1972 while retaining its radical political and counter-cultural positions.