The New Penelope Café and its era!
Call for memories!

Open for just a few years in the late 1960s, the New Penelope Café is legendary in the history of Montreal music and nightlife. It was the first independent concert venue in Montreal to feature important names in 1960s rock, blues, folk and jazz, from Muddy Waters and Frank Zappa to Joni Mitchell and Jesse Winchester. It was also a well-loved hangout in the Carré Saint-Louis/ Milton-Parc area where the city’s counterculture and arts scene emerged.

The non-profit organization ARCMTL is working on a book and online exhibit about the New Penelope Café and its era, 1965 – 1970. 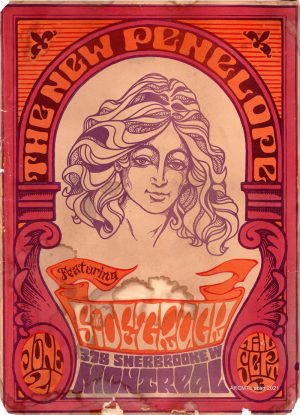 Poster (design by Peter Adams) advertising poster for The Sidetrack at the New Penelope Café, summer 1967. From the Allan Youster collection, ARCMTL.

We’re looking for anyone who remembers those times, or who may have material such as old posters, flyers, audio or video recordings, ticket stubs, newsletters, publications or other ephemera.

The era began in the early 1960s, when the folk music craze was booming across North America. Montreal had a number of cafés and venues featuring folk music, including Finjan’s where a young Bob Dylan played as an unknown folk singer passing through town in 1962.

The New Penelope had its roots in this folk scene, starting out as a small café called The Fifth Amendment before becoming the Penelope and eventually The New Penelope. The man behind it all, Gary Eisenkraft, was himself a folk singer who had often played in the cafés of Greenwich Village in New York.

Eisenkraft leveraged his experience and his many connections in New York to begin organizing folk music concerts in Montreal. Soon, he was also bringing up avant-garde acts such as The Fugs or the free-jazz revolutionaries The Young Ones to the delight of Montreal audiences that would not otherwise had any chance whatsoever of seeing these acts perform locally.

The rapid cultural evolution that happened in Montreal from the mid 1960s to the early 1970s was happening all over the world – the post-World War II establishment was giving way to a new generation bent on trying new things– new music styles, new fashions, new slang and expressions. There were changes in the media landscape as well, with the emergence of counter-cultural magazines, newspapers, FM radio and on and on. 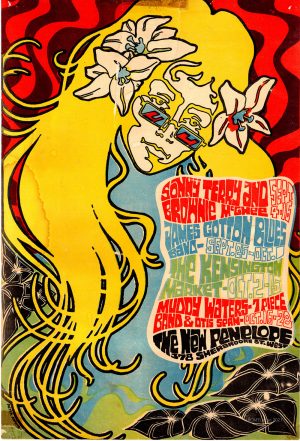 In Montreal, this was reflected in the emergence of community newspapers and magazines such as Logos, Pop-See-Cul, Take One and Mainmise, and the arrival of CKGM (later CHOM) FM. The New Penelope’s concerts were advertised in these publications, alongside many neighboring businesses such as the Phantasmagoria record shop, The Purple Unknown poster and paraphernalia shop and many more.

Through this exciting project, Montrealers will be able to go back and learn about these places and people who did so much to lay the foundations for the city’s thriving independent arts and music milieu.

Please contact us if you or someone you know may be able to help! We can be reached by email at: arcmtl@arcmtl.org or leave a message at our archive centre in Montreal, 514-279-6187.

To find out more about the New Penelope Café, check out the blog posts on this site with longtime NP doorman Allan Youster here, or local rock journalist Juan Rodriguez here, as well as designer Francois Dallegret here.

The New Penelope Café and its era is a project made possible in part thanks to funding from the Governement of Canada and the Digital Museum of Canada.