LR: Did an editorial team or just yourself and your co-editor then read and select
the works?

KN: In the early days Jim and I selected the poems for the magazines and the books for the press together. After a while, as we grew more confident, we started making individual decisions. There were entire issues that I edited in Montreal and entire issues that he edited in New York. Where the issue of the magazine was produced, which country, depended on which arts agency was funding the issue, and which printer in that country was offering us the best price. When an issue came out we sent out two copies to every contributor—through the mail!

LR: I am particularly interested in learning a bit about how it ended up being printed on Vehicule’s presses. They were co-op—did this mean you had to pay a fee regularly to use it, or pay the pressman when you needed to use it?… Did you supply paper? How did it get printed then collated then bound? Did volunteers gather to help with typesetting, collating, etc.? 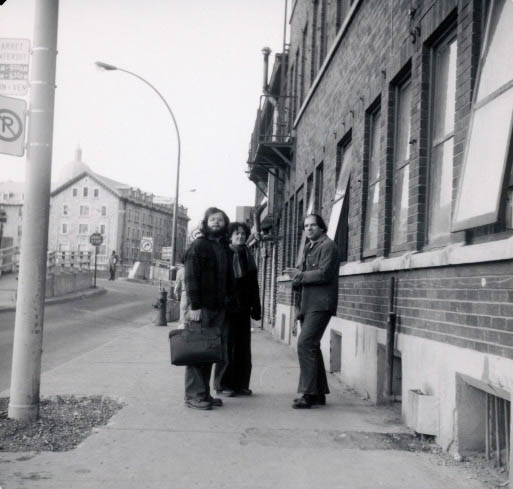 KN: I was on the editorial board of Vehicule Press by around September or October of 1975. But when it came to bringing CrossCountry magazine, for instance, in to the Vehicule print shop I was just another customer. So my view of the print shop, as a publisher and editor of CrossCountry, was and is as a customer. Their business model may have been that they organized themselves as a cooperative, but as a customer they were just another printer. They needed to make enough money to pay salaries and pay their bills so they needed to make a profit on every print job that they did. So, as an editor and publisher of CrossCountry, I hired them to do a job as I would hire any other printer. And one expected the same degree of professionalism that one would expect from any other printer. So collating and binding was their job. They delivered a finished product for a specified price and I paid the bill.

When I had my Vehicule editor hat on it was completely different. Because I was, in that instance, an unpaid employee of Vehicule Press. I selected and edited manuscripts for them, and they undertook the financial risks, rewards, and responsibilities of being the publisher. Having their own printing presses helped them to keep the costs down.

My best guess would be that, of the sixteen issues of CrossCountry, maybe five or six of them were printed at Vehicule. The first couple were printed in New York, the last one at Coach House in Toronto, a few in the middle in Michigan.

LR: You mention the Eldorado—was this what has been described as a sort of cafeteria with vending machines? Did you ever go down to the hot dog joints around the corner (Coin Dore, Frites Doree, Poolroom) or to the Woolworth’s across the street for lunch? Were there old taverns—old man bars in the area that artists and poets frequent for cheap pints after events or readings?

KN: I am not going to say that there were no vending machines at the Eldorado, but if there were I honestly don’t remember them. I had my “Eldorado diet”—and that was a fried bacon and egg sandwich on white toast and a pecan roll. I got that direct from the counter. They fried up the eggs and bacon before my eyes and then they cut the pecan roll in half and buttered it. And I would imagine that I rounded that out with a small carton of milk, but now I’m guessing. Maybe it was tea.

I never ate at Woolworth’s. Ever. When Artie Gold was down at the press or the Gallery during the week—which was rarely—we definitely were around the corner with the hot dogs and the frites.

At least a couple of times we went into a tavern around the corner on St. Laurent. We had a few informal meetings there and one time we wrote a collaborative poem there. I think the poem is included as a footnote in Tom Konyves’ book Poetry in Performance.

LR: I’m not sure if you’re aware that pretty much that whole block/area is slated to be demolished for high-rise condos. Would you feel any regrets to learn of the complete demolition of the four storied corners around which Vehicule Art stood, or would it just be another change in era, such as how you mentioned the glitzy nightclub era had long faded by the time you guys took up shop on that block…

KN: Nobody likes hearing about the demolition of the sacred sites of their youth. It’s horrible, terrible, sad. But you get a lot of that by the time you’re in your sixties. Half the places I lived in Montreal have been torn down. Artie’s gone out into the universe. The place where I used to live when I lived just down the street from him has been torn down. I don’t know if the place where he lived in the McGill ghetto is still there or not. The next time I’m in town I will have to look. But I’m still in the gallery, and the gallery is still in me.

LR: Some have argued that the corner of St. Laurent-Ste. Catherine is somewhat at the heart of Montreal’s literary imagination, being close to the border between Old Montreal and modern downtown, and between the English and French halves of the city. . However, I’m not sure I’ve seen much reference to the area of “The Main” in general in the works of Vehicule poets. Was this perhaps a subconscious reaction against sounding like the Mordecai Richler generation of writers who so mythologized the Main?

So I went out of my way to acknowledge the importance of that street in my life and in the lives of many Montrealers.

If Tom Konyves had ever been able to find a parking space down around the gallery (St. Laurent and Ste. Catherine Street) I doubt he would have ever written his wonderful poem No Parking.

Those are the two “documents” that come most readily to mind. But the poetry of the Vehicule Poets is SATURATED with Montreal references that range out over the entire city, extending out onto the West Island. I agree that The Main is important. But then so are all of the other streets.