LR: Aside from the Vehicule artist-run centre and the universities, were there any cafes or venues where you and/or other writers would hang out, draw inspiration, people-watch or take in readings?

KN: The first time I ever did a poetry reading it was at The Double Hook bookstore in Westmount in the Spring of 1975. I shared a reading with Claudia Lapp. And I think the first solo reading I ever did, later in that year, was at The Word bookstore. So bookstores were a really important part of the equation. Artie Gold and I used to hang around The Word “frequently.” Artie was in there just about every day, because he lived just up the street, and I was in there pretty much every day I was in at McGill. After my teaching day was done at McGill I would hustle over to The Word, to see what new books were out, or what was new in the poetry section.

LR: Do you recall the first time you walked over to the Vehicule space—that area was still the red light district, was it not?

There were streetwalkers on Ste. Catherine Street, and there were more of them in the evening. Red light district is a little too gaudy—it was a rundown neighborhood, which is why the gallery was there—cheap rent. I don’t think that made much of an impression on me. I was more intrigued by the fried egg sandwiches and pecan rolls at the Eldorado!

I don’t remember the first time I went to the gallery, but I figure I went over there the first time to visit Vehicule Press, which was located in the back room of the gallery. And it was nothing much to look at. There were a couple of printing presses, one big one and one smaller one, a couple of printers, a couple of other people working there. I don’t know if the printing cooperative ever exceeded five or six people. I was probably there to introduce myself to Simon, since he was going to be my publisher. 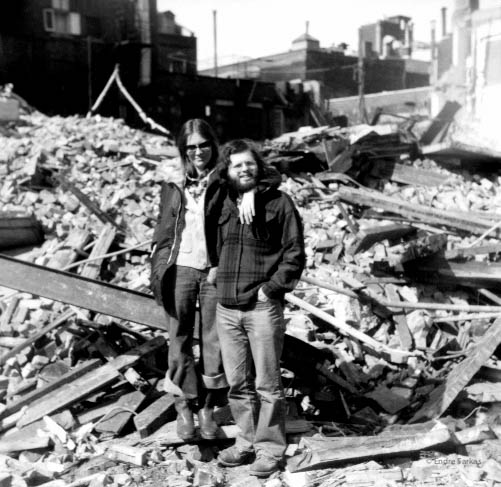 LR: For all the references to this space that people we’ve spoken to have made, no one has yet described the experience.

KN: White walls, wooden floors. A large gallery space. The “office space” was up on a second level. The Press was in the back. There was an old out of tune piano. On weekends the heat was turned off, so if you went to a Sunday poetry reading in winter you kept your coat on, and if you were doing the reading you kept your coat on. “Vehicule Art” was in neon down at street level, and you had to climb a formidable flight of stairs to get up to the gallery. There were rickety wooden chairsto sit on for readings, so often I sat on the floor.

I have to say I fell in love with the gallery at first sight. I just loved the space. Maybe the musician in me was feeling all of the old-time jazz vibes. It had a good feeling to it. The place exuded possibility.

LR: As a decaying former nightclub, I would presume that Vehicule must’ve felt like a place of transition, taking up an entirely new practice of culture in an area that saw the best of nightlife and cabaret culture from the 1920s-1950s.

KN: The past had been erased. It was years later that Simon told me about the Montmartre. The first generation of artists had done a fabulous job of renovating the space and making it feel NEW. And the artwork was all alternative, experimental, sometimes excessively weird, just crazy conceptual stuff. The parallel galleries were set up as an ALTERNATIVE to conventional commercial gallery spaces, and Vehicule definitely took advantage of its alternativity. We all walked in as one kind of poet and walked out as another kind of poet because of our exposure to the art, the environment of the conceptual, the permission and the demand to be absolutely up to date. There’s a certain tendency towards traditionalism in poetry that the gallery just drove out of the Vehicule Poets. I was pretty conservative in my artistic tendencies before I arrived at Vehicule. And all that stuff got jettisoned right quick. Part of it was because of the poets I was talking to, like Artie Gold and Tom Konyves, but a lot of it was because of the environment I was in. In 1975, I was probably in at the gallery for some reason or other six out of seven days in the week. I was hardly ever there on Saturdays. So I was coming into contact with the experimental contents of the gallery on an almost daily basis. That started doing funny things to the inside of my head.

LR: You mention running the small magazine CrossCountry—for the sake of understanding how one went about such an activity with no recourse to word processors, photoshop, layout software or laser printers, how the heck did you manage this? What were the steps in the mid-70s in setting up and then producing issues of a new periodical?

KN: Believe it or not, there was life before personal computers. CrossCountry magazine ran for sixteen issues (1975-83) and CrossCountry Press produced twenty-three books in roughly the same time period. We started it all with a grubstake of $300. In the old days you hired typesetters to typeset and printers to print. That being said, I did a lot of typesetting when given access to the equipment. But printers in New York, Montreal, Toronto and Michigan printed our magazines and books, depending upon who came in with the lowest bid.

It started the way it always starts, with a couple of people saying “Let’s start our own little magazine!” And it takes off from there.

LR: I would assume some of the steps would include: coming up with a name, a policy for submissions, sending out (by mail? by word of mouth?) a call for submissions, deciding on a price and how it would be sold (distributors? consignment in a few local shops? Subscriptions?) whether it would break even (assuming that no writers were being paid, and that break even means just paying off the printing and postage costs).

KN: All true. Let’s tackle them. Jim Mele was in New York and I was in Montreal. As we talked about it we decided that what we wanted to have was a magazine that focused on both Canadian and American poetry. We didn’t realize we were walking into something of a minefield, but more on that later. So we had to come up with a name, so we called it CrossCountry, no space between the words. I can’t tell you how much junk mail we received in a ten year period related to cross-country skiing!

Having come up with a name for our magazine, the first thing we did was try and recruit institutional subscriptions. Through the mail. I don’t remember how many libraries and universities we attempted to contact. I think we got around one hundred replies constituting one hundred subscriptions. It was a place to start.

We contacted writers we liked—through the mail—and asked them to send us work. Many of them did. We were off and running. Early issues were hand distributed to independent bookstores in New York and Montreal. By something like the fifth issue we had small press distribution in both Canada and the U.S.

You could kind of break even, or come up with enough money to print the next issue. But then the granting organizations came into the picture: the Canada Council and the National Endowment for the Arts. For a while they liked what we were doing, so we received funding. When they got tired of us, and all the money was spent, we folded the magazine and the press. But we did close to forty publications in eight years—that’s not bad.