On the occasion of the theatrical run of a new NFB documentary film, Ninth Floor , Archive Montreal digitized a number of student newspapers and images from its archives published during the infamous Computer Riots (otherwise widely known in its era as the Sir George Williams Affair), which played out in January and February 1969 at what is now the Hall Building of Concordia University in downtown Montreal. 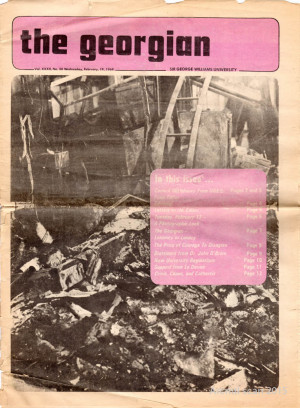 The first issue of the Georgian student newspaper following the Computer Riots.

The film was premiered in September 2015, and includes recently unearthed student videotape footage of protest leaders and the various occupations that occurred during the crisis. It is high time that this important chapter in local and Canadian history gets wider exposure. The shock waves stemming from the incident rippled across Canadian universities, forcing them all the reconsider whether their entrenched culture and ways of doing things were out of step with a rapidly evolving modern world. Although the casual acceptance of racism among the ranks of faculty was the core issue, the mishandling of the affair by the University and the forces of law and order was a major factor in the unfortunate sequence of events. In short, the old rigid, mainly white Anglo-Saxon institutions, such as Sir George University, by the late 1960s, had still not understood that times were changing; that students needed to be involved in the evolution of University policies and problem-solving; that it was no longer the staid white conservative 1950s Canada anymore.

One of the premiere screenings of the film Ninth Floor was held in early September 2015 in the Hall Building itself. It was attended by many of the subjects, including the longtime Canadian senator Anne Cools — who had been arrested during the Computer Riots- and many others that had been there. In an extensive question and answer session after the screening, the issue of whether the University had truly learned its lessons in 1969 was raised, with various periods of unrest at Concordia such as during the early 2000s or during the 2012 Printemps Érable brought up as examples. The filmmakers replied that for the purposes of their film, at least, the University was very open and willing to provide access to any and all archival materials, no questions asked. Archive Montreal can attest to this openness, having received permission from the University to re-print our copies of student newspapers from that era on this website.

It can certainly be debated as to whether Concordia or other local Universities are truly as inclusive of students or marginalized communities in their decision-making as they should be, and the question of whether Universities manage demonstrations and protests properly is still very debatable. But as an important chapter in our history, it is hard to deny the importance that the Computer Riots still have and how pertinent its many lessons are both to Universities as well as to teachers, students and protesters of all kinds today. Just the coverage of the film’s release in reviews here and here has done a lot to raise the awareness of the affair and its ongoing pertinence.

We spoke to several individuals for Montreal Underground Origins who attended Sir George University during the crisis or had a role in it in some way.

Veteran Montreal poet Endré Farkas, a Sir George Williams University student during the crisis, related his experience in an interview posted elsewhere on this site.

EF: I was part of the occupation. There were two kinds of occupations… The first was the black students’ who took over the computer floor, and maybe a week later, the white students took over the cafeteria in support. We also took over the teacher’s faculty lounge– that’s when the teachers turned against us, when they couldn’t get to their booze. So I was part of that second occupation– I mean, just as a body, I wasn’t part of the leadership.
LR: And how did that work? Did you actually have to stay there overnight a certain number of days?
EF: Yeah, we settled in, we brought our sleeping bags,
LR: And runners go to get food?
EF: Well, we took over the cafeteria, so we supplied food [to the various occupations], but there was flexibility in coming and going. It was only towards the last couple of nights, when there were rumours of the cops coming, that the coming and going was controlled.
LR: So they didn’t have the riot squads out back then? Like for the Printemps Érable student movement in 2012?
EF: Oh, no. They were regular cops and nobody ever, in Canada, experienced that kind of problem before. From what I remember, we kept hearing different rumours that there was a compromise where the failed students were going to be allowed to take the tests again.
LR: That was the deal to settle the complaint about the professor failing all the black students and the review board backing up the teacher.
EF: Yes. And then the cops started to come in just as we assumed that it was over, that it was negotiated. Then the black students started throwing things out of the computer centre windows: not so much the computers but the punch cards—these held people’s PhD’s, you know. That’s when you could hear from downstairs other students yelling, “Kill the niggers!”
LR: So there was a counter protest? Much like it is today; a core of students that just want to study and not deal with politics.
EF: Yes, and don’t interfere with my right for an education even if it means that I may have to pay more for it. It usually broke along the lines of political science, philosophy and English majors to the left, and economics, business and engineering to the right. That hasn’t changed much.. the night before [the police raid] I went home because I wasn’t feeling well, and next night the cops raided it. So I never got busted …
LR: Did any of your friends get arrested?
EF: Yeah, but it was mainly the black students who got arrested, the whites were let off with a warning or a fine. Black students got put into jail. I think we were unique in the sense that it was the first such crisis outside of the U.S.