GG: Yes. At that time, in the late 60s, there were not a lot of alternative businesses. I would almost say that most of them were started by draft-dodgers a bit later, that’s when another whole new scene started.
LR: The Prag is one thing that held on though, I think they opened up the mid-‘60s…
GG: Yes, I remember the Prag and sometimes if they had a good, nice ad I would just give them a full page. 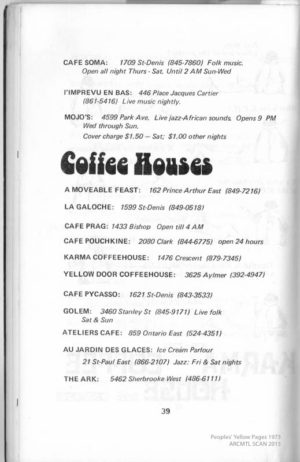 LR: Cheap Thrills is one of the first—It’s still there…
GG: Cheap Thrills goes back forever!
LR: And Guy Lavoie (manager of Cheap Thrills) also goes back to the first press at Véhicule…
GG: I know that and this issue of PYP (leprechaun cover) was also printed at Véhicule Press, because Hijack Press and the guys who worked there, ended working as a printer over at Véhicule.
This (yellow cover) is the very first version of Peoples’ Yellow Pages because it has no name… I didn’t know what to call it– “Yo!” ?? — and that’s why there’s two names inside. I might give credit there to Hijack Press, they published the first two editions. They were in the IATA building on University Street — IATA didn’t know of its existence. It was operated by the night shift; I would go in to this huge printing room with tons of printers and tons of paper and nobody else there. We ended up printing it on their paper, printing & stapling it on their machines. Any mistakes we would make, we’d bury them deep in the bottom of these big barrels of waste paper left by the day shift. I remember the night that we took the first issue out, we put the boxes on a couple of big dollies, down the elevator, out the front door and into a borrowed truck so fast that the security guard didn’t even move. They didn’t even know what was happening — nobody expected it, we just high-tailed it outta that that place! (laughs) The next day, new rules & regulations were in place at IATA, because they never ever found out what was taken out of the place! (laughs) It was called Hijack Press because of course IATA was the International Aviation Transport Association of the United Nations…
So that’s how the first one came, then all of a sudden a newspaper caught wind of it and wrote about it. We only printed up about 500… and now almost a full-page write-up in the newspaper… we could sell thousands!! But we didn’t have thousands. If we had had the money, we would have done it with a bigger run, and would have made more money… 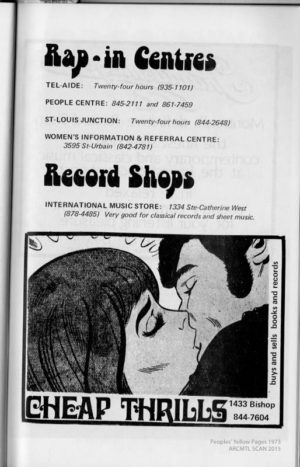 LR: And then the next one, which is the most common one I’ve seen…
GG: The one with the cross on the cover was done on the South Shore, because of the binding and everything.
LR: Was that Payette & Simms perchance?
GG: Yes.
LR: How many did you print of that one?
GG: Almost five thousand I think. That was a pretty good run in Canada back then. I remember one edition I was working on it for quite some time, I went up to CHOM and the guy was on the air, I just handed it to him and he said: “Oh! We heard that this was in production” and asked where it was being sold at. So I said: “All the alternative places like Labyrinth,” and I said to him: “Don’t mention Classics [the bookstore chain]”. I had gone into Classics and asked them if they wanted to carry it, and they had refused to. I get into the car afterwards and on the radio he’s saying: “It’s available at Classics” (laughs)! So the next day I went into Classics and they say: “We’ve been inundated with telephone calls about this book at our store in Town of Mount-Royal in the Rockland Shopping Centre.” So I said: “Would you like to take the book?” and this time they did.
LR: Classics is the one that became Coles and then Chapters, right?
GG: Yeah, and they had the one big bookstore on Ste-Catherine Street near Crescent at the time. A big plus was they classified as an information-travelers kinda guide, which is what I had intended it to be, so it was always at the cashier’s– the best location you could possibly get for a book!
LR: How much did you sell them for?
GG: I based the price on what I could afford, little did I know, I couldn’t afford to exist! Even the café when it first opened… I was selling fresh orange juice for 80 cents a glass and it was costing me at the time $1.10 to make, and I thought 80 cents was so much money that I was lucky to get it. I didn’t even think of calculating the cost. Once the costs were calculated, I was sitting there saying: “What the Hell!?” No, no—the price was just arbitrary, it was what I thought I could afford. Did I make money? No! 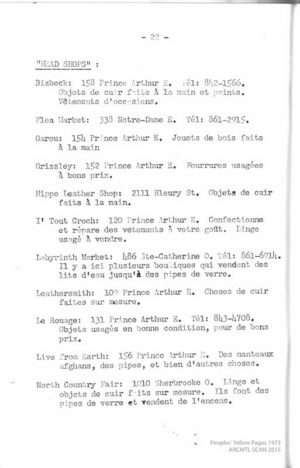 LR: But the printing—even when you paid for it later—I’m assuming it was fairly cheap.
GG: I can’t remember that. I do still have all the printer’s plates, not the metal plates, the paper plates that I did with print glue and t-square. I would go down to Véhicule Press to have everything printed up. To check for spelling mistakes, I would have to take my X-acto knife and cut out each word and then replace it in the script. That means that if there was a mistake half-way through, I would have to cut and move everything around to get a flowing paragraph and then I would line it up … that’s how I did every one of them!
And the girl who did the maps and some of the drawings—Cynthia, I think her name was. She was the waitress at Mazurka’s. I used to spend time there having chicken-noodle soup with bread from Rose’s Bakery—they made the best rye bread in the world!—and that was down on St-Dominique, above Sherbrooke—and she would give me all the bread I could eat, and that’s what I could afford. We were chatting one time—because she was always my waitress—and she said she did illustration. So she did all the illustrating in the last edition.
LR: I presume that partly why there were no other editions was that you got too busy opening Café Santropol.
GG: That’s right. In fact when I was opening the café, I was so involved in renovating and getting things ready that somebody said to me: “What kinda food are you gonna serve?” and I hadn’t even thought of it. I was gonna open in a week, what am I gonna serve? I jumped on my bike and went to the Moveable Feast, which was named after Hemingway, and that was a vegetarian café-restaurant that had alternative books at the front. So I walked in and said: “Do you have any cook books?” and there was a reprint of a depression-era sandwich book that appealed to me. I took it out and looked at it, and said OK fine, this is what the menu’s gonna be. That night I went through the book and chose different sandwiches and that’s how the sandwiches got here! I still have that book! 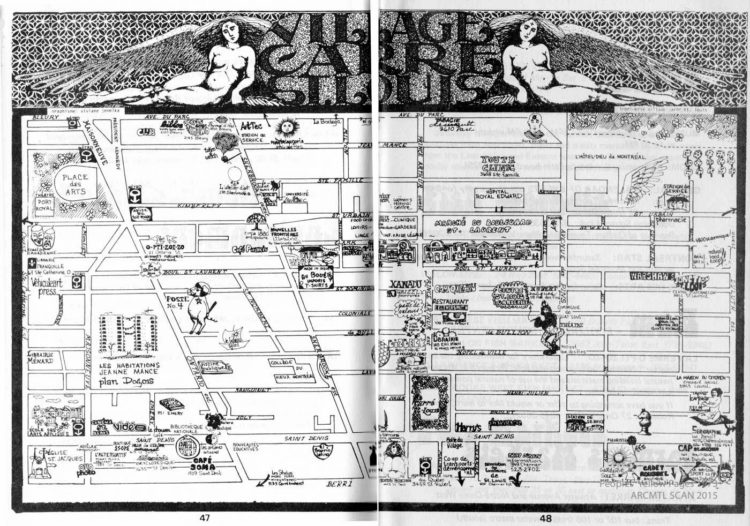 I remember also going down to Stash’s, he had the café in Old Montreal, it was a Polish restaurant and he had also opened up the flea market near there. And he told me, as far as the permits go: “What you do is just get a hotplate: it’s a loophole! I take all my Polish sausages and just boil them up in the hot-plate, I make my borscht on a hot-plate and you don’t have to get all those expensive, overhanging vents and fire extinguishers and all that stuff,” which none of us could afford. So obviously, I was never gonna do French fries, or seriously cooked food, because the hot plate was the simplest thing and that’s why sandwiches came in.
I opened Santropol in ’76 on St-Jean-Baptiste Day. I finished renovating it with the money that I got from the big concert that day. It was the first year they had the big celebrations on the mountain—there were so many people there, I made money selling sandwiches to people coming or going to the concert, closed it down the day after, finished the renovation and opened again on July 4th. René Lévesque came to power in October of that year, and everybody was leaving Montreal, and I’m sitting there saying: “I must be the only English-speaking person opening a business while the rest are running away!” (laughs) I kinda figured, ”Well, they guy is from the same town that I was from, so why not just stick around!”
LR: It kept the rent cheap!
GG: Yeah! When I first rented this place, the front section was $50 a month. Even at that, it was a stretch to pay the rent, because of the tough times. But nowadays it’s really hard to open a small business. When I first opened Santropol, I couldn’t wait. Judy, one of the owners at the Rainbow Bar & Grill where I had worked, said to me: “Make sure you get a list of all the things that they (the inspectors) want you to do.” I got that list; they don’t want to give you that list but I got it, and I did everything that was on it. Then the inspector comes in and says to me: “Well, where’s your grease filter?”
I said: “Grease filter?” 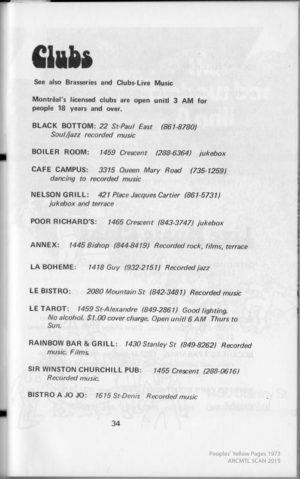 He said: “For under your sink for grease and oil and stuff.”
I said: “I’m not cooking anything!”
“Well, aren’t you gonna have French fries?”
I said: “No way, I’m never gonna have French fries. I was born in a restaurant that introduced the french fries and hamburgers and hot dogs to the Gaspesiens, I went to school smelling like that, like a French fry constantly, and the French fry machine caught the house on fire every three nights and my parents would come and wake us up and say the business is on fire”… we lived behind the restaurant.
But the inspectors couldn’t believe me. Back then, there were pizzerias, high-end restaurants, hot dog & hamburger joints, and nothing else! They just assumed that we were gonna sell soft-drinks, French fries and hot dogs and you’d have to have a grease stove, and I said: “No, no, no.”
Eventually he got me though, for not having a Dixie-cup dispenser in the bathroom, and I went to court. When the judge asked me, I said: “Listen, I did everything that I was supposed to do on the list.” The thing that they never asked me was, do you have a permit to be open? And I didn’t!! I was opened for 4 months before I got a permit because I couldn’t wait any longer, and I looked at the judge and I said: “I opened about 4 months ago and now I’m here on a Dixie-cup dispenser charge.” He slammed his gavel down and said: “You got your permit!” So I got my permit in court for this place. The café only opened up at about 4:30 in the afternoon and closed at like 4 or 5 o’clock in the morning. So when the inspector was going home, we would be opening and when he was going into work, we were closing. I’m sure they came by wondering, “what is this place? Because it’s never open!” Not when they were around! 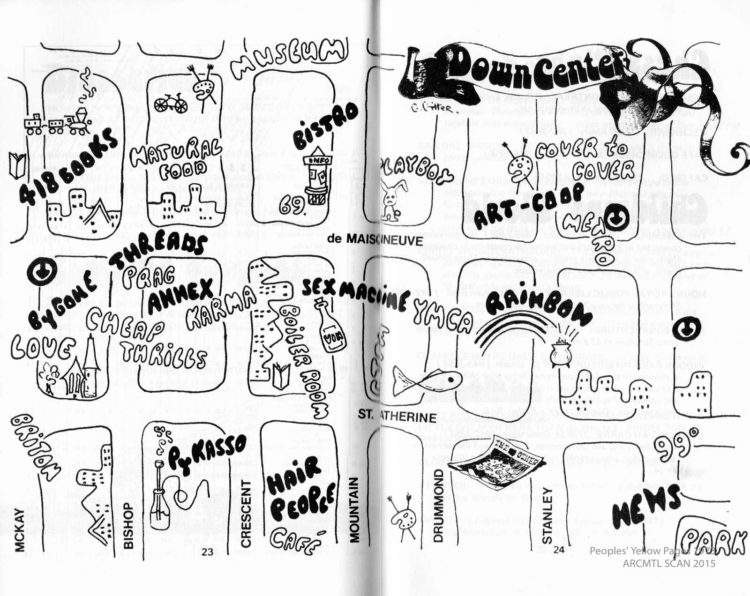