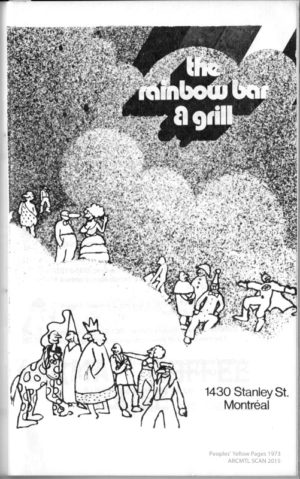 LR: How long did you work at the Rainbow Bar & Grill?
GG: Well, I didn’t last very long… but long enough to collect unemployment. Back then, it was 9 weeks and then I could get unemployment all winter and then I could write this People’s Yellow Pages.
LR: Did the Rainbow have live music at the time?
GG: Yes, plus they had films, so not only did I wash dishes, I was the projectionist as well. So when I left there to get unemployment insurance, I didn’t say that I was the dishwasher—I said I was a projectionist!! (laughs)
LR: Do you remember any of the local films that might have played there?
GG: No.
LR: Was it retro, vintage stuff?
GG: Yeah.
LR: Do you remember any of the artists that played there?
GG: There was April Wine, and Penny Lang, Bruce Cockburn—he played there a lot. It was a small venue in the back. It was one of the first kinda bars that was not a tavern and had more of a contemporary feel. I remember when the Esquire ceased to be The Esquire, they had hardwood floors and the dancefloor was the size of a skating rink, you could fling yourself across the floor for miles.
LR: Did you used to go down to artist-run centres like Véhicule Art or Powerhouse Gallery?
GG: Yeah, I would go to the Véhicule Art, at times to get stuff printed there but also for readings and events. And Powerhouse was over in the church there near Guibeault & St-Dominique. It was all very central. I remember living on Coloniale just below Pine Avenue, and finding it rather far to walk up to the health food store on Duluth Street. In those days, nobody was living up in Mile-End. 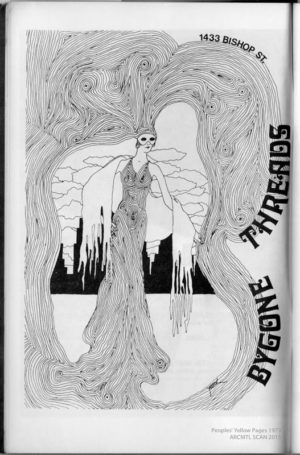 LR: Thing really were more centred around Sir George & McGill, St-Antoine to Sherbrooke…
GG: If I wanted to have a beer in this neighbourhood, I would have to go down to Jean’s on the corner of St-Dominique and Prince-Arthur, it was kind of a tavern. Or down to the Swiss Hut on Sherbrooke and Bleury, and then it became the Chambre Noir across the street, or you’d go over to Mountain or Crescent…
LR: Not one bar on St-Laurent?
GG: There was nothing here… there was the Balmoral Tavern on the corner of St-Cuthbert & St-Laurent, that was about it.
When I decided to write the Peoples’ Yellow Pages, I would bicycle around this neighbourhood and collect business cards, and I would write down all the different alternative places. That’s when Prince Arthur Street was just starting up with Bill’s Leather shop and the Moveable Feast. Even on St-Denis, the only place was a chess club just below Cherrier on the east-side across from Harry’s 24-hour restaurant facing Carré St-Louis. If you look at the maps in the Peoples’ Yellow Pages, you notice that it’s all concentrated in a small area, the Plateau. The very first—what I would call health food store, where you would go in and volunteer and everything was in bulk, was just here on Duluth Street just up from St-Laurent. And the Moveable Feast must have been one of the first vegetarian restaurants in Montreal. 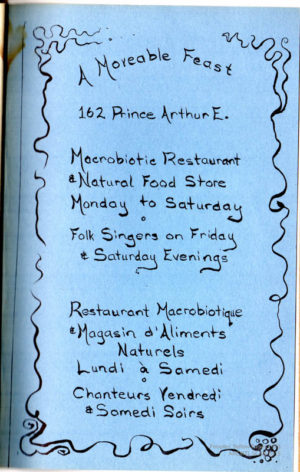 LR: For the first issue, you mention being inspired in Amsterdam but you didn’t mention what publications you saw there. Was it in the Red Light district?
GG: I think it might have been called the Amsterdam Yellow Pages, and there was also one from San Francisco too, the Whole Earth Catalogue was coming out at the same time as well. You could tell that they were printed in small runs, that’s what gave me the idea, I knew that I could do that too. So I dropped out of University and I decided I was going to do Montreal’s People’s Yellow Pages.
LR: I like how the Peoples’ Yellow Pages has a mix of nightlife and fun stuff, but also important resources like health clinics that provide abortions…
GG: And the price of marijuana & hashish, which back then, nobody was printing that information.
LR: Was that why there’s a certain anonymity to it, and why there’s a P.O. Box…
GG: Yeah, that’s station “G” –That was at Clark & Pine Avenue in that building on the southwest corner. That was our post office, then it became a bar, I think it might have been called Secrets or something.
LR: It was considered safe at the time, a post-office box… What sort of research team did you assemble to make sure, for example, that you got all the marijuana prices right…
GG: Me! I did all the research. (smiles)
LR: There was a very similar one we found called Montreal Insolite in French. It has a remarkable overlap with yours, but they don’t really include community resources, they go into some detail as to where there are still whorehouses, where the gay bars are, the straight ones, and the ones that are mixed. 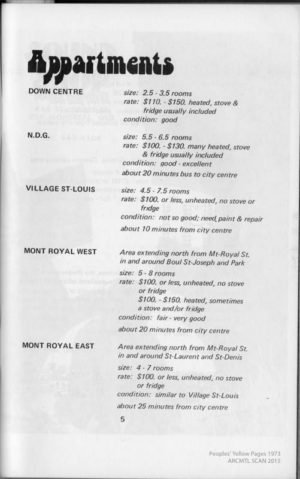 GG: You know something? There was precious little of any of that stuff in Montreal. When I said that there was very few, there was really really really not a lot happening at that time. Montreal—I think in the ’30 & the ‘40s—it was everywhere, but by this time it was pretty dried-out.
LR: I spoke to the guy that did Logos and in ’68-’69 they were printing 25000 copies, but then I get the sense that by ’69-’70 there was a petering-out of the ‘60s scene and a bit of a dead period…
1
2
3
SINGLE PAGE
Leave a Comment  |  Categories: Oral HistoryPublicationsZines
Working the door at the New Penelope with Allan Youster  ►
◄ Freda Guttman, veteran Montreal artist and activist