At Expozine : The early days of Montreal’s independent press 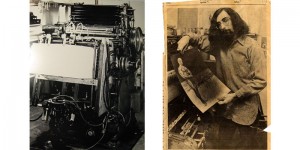 Beginning in the mid-1960s, the central districts of Montreal began to develop a new cultural milieu in which artists, writers, poets and musicians could get to know each other and get their works known by the wider public. It involved the creation and programming of new cultural spaces where Montrealers could host readings, exhibits and concerts of their own work and of visiting luminaries such as Allen Ginsberg and Bob Dylan. It also involved the emergence of independent media, including student radio stations and newspapers; small press cooperatives; and independent book, magazine and record stores where young local creatives could sell their own publications and recordings in a do-it-yourself fashion.

This discussion will explore what the early 1970s small press and literary scene was like : where could people find small press publications, who was making them and how? Since the participants are still active in publishing and bookselling to this day, the panel will also explore the differences between that early era and today regarding costs of living, costs and work involved in self-publishing and the changes in how books are promoted will be explored. Visit this page for more information, or email archivemontreal@archivemontreal.org .