LR: Did he smoke in the class?

LR: So there was an ashtray on the desk?

EF: You bet. But what these guys taught me is that you can write about the world you live in, and it’s interesting. Part of me got interested in the arts here because it was happening and I could be part of it and nobody said no.

LR: Was there any sense that it was a bit marginalized in Montreal given that it is like today a minority community?

EF: Until the late 60’s, Montreal was the centre of English-language Canadian literature. Louis Dudek was here, Scott was here, Smith indirectly was here, Hugh McLennan.

LR: And it was Canada’s metropolis before Toronto passed us. The years you spent in University were very transformational for the city and in Universities in general across North America. Were you there during the Computer Riots?

LR: And how did that work? Did you actually have to stay there overnight a certain number of days?

EF: Yeah, we settled in, we brought our sleeping bags,

LR: And runners go to get food?

EF: Well, we took over the cafeteria, so we supplied food, but there was flexibility in coming and going. It was only towards the last couple of nights, when there were rumours of the cops coming that the coming and going was controlled.

LR: So they didn’t have the riot squads out back then? Like for the red square (carré rouge) student movement in 2012?

EF: Oh, no. They were regular cops and nobody ever, in Canada, experienced that kind of problem before. From what I remember, we kept hearing different rumours that there was a compromise where the failed students were going to be allowed to take the tests again.

LR: That was the deal with the black students, the complaint that they had made about the professor failing them all and the review board backing up the teacher.

EF: Yes. And then the cops started to come in just as we assumed that it was over, that it was negotiated. Then the Black students started throwing things out of the computer centre windows: not so much the computers but the punch cards—these held people’s PhD’s, you know. That’s when you could hear from downstairs other students yelling, “Kill the niggers!”

LR: Oh, so there was a counter protest? Much like it is today; a core of students that just want to study and not deal with political shit.

EF: Yes, and don’t interfere with my right for an education even if it means that I may have to pay more for it. It usually broke along the lines of political science, philosophy and English majors to the left, and economics, business and engineering to the right. That hasn’t changed much.

LR: Had you finished your occupation when the punch cards started flying out?

EF: Here’s a kind of almost a soft ending to it… I developed diarrhoea the night before, so I went home because I wasn’t feeling well, and next night the cops raided it. So I never got busted because of my stomach.

LR: Did any of your friends get arrested?

EF: Yeah, but it was mainly the black students who got arrested, the whites were let off with a warning or a fine. Black students got put into jail. I think we were unique in the sense that it was the first such crisis outside of the U.S.

EF: Nobody knew what to do with it. That was during my undergraduate years – I then took a couple of years off to be a hippie on a commune. The commune in the Eastern Townships was with other budding artists. One of them ended up being Chris Knudsen, who did a lot of my book covers, and then became a part-time teacher in the Fine Arts department. 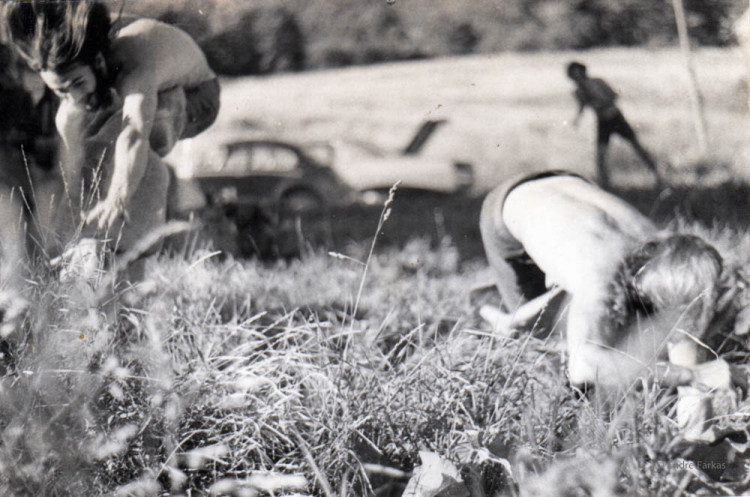 LR: Were you totally cut off from civilization?

EF: Not really, it was in the Eastern Townships, around Waterloo, but at that time the roads weren’t that good so it was about 2 hours away. Somebody knew somebody who had 1,500 acres on top of a mountain with an abandoned farmhouse. They were looking for people to take care of it to keep the hunters off of it. There were about eight of us, so we got free land, free house, no electricity.

LR: So you had to grow your own weed and vegetables!

EF: Yeah the weed we grew a little bit, I must admit, but actually there was a commune down the road that was more into the weed growing, so we got it from them. We were more a bunch of wanting-to-be artists, visual artists, Chris lived up there for a while, and a photographer named Michel Bonneau. My woman at that point — who later became my wife — was a dancer. There were musicians, too, and so it was more cultural.

LR: So you would have sketchbooks and notepads…

EF: Yeah and typewriters. It was intellectual, it wasn’t cultish, and it was French and English. It was a mix –that’s where I got exposed to Gilles Vigneault, Paul Piché.

LR: Do you remember any French writers or artists in particular?

EF: At our commune? No. the Francophones who were there were more visual. Michel was a photographer, Claire was a visual artist. We all shared one paying job. At the local inn, five of us took turns being a dishwasher, so we made enough money to pay the electricity bill, and the five women each took a day to be waitresses — so you worked one day a week, and collectively we made enough money.

But there were other communes around us that were more political. We got raided once by the RCMP by mistake because they were looking for the other commune: “Québec Libre,” I think it was called. Our commune was called Meatball Creek Farm.

LR: Was that in ’70 when they were looking for the (October Crisis) kidnappers? They did hide in the townships…

EF: Yeah. I had an old manual typewriter that hardly worked I had picked up at the town dump, and when the cops came they confiscated it because they wanted to see if it matched the typewriter used to type the kidnap notes.