Allan Bealy grew up and studied art in Montreal. In 1975, he moved to New York. While in Montreal, he published Davinci, and later in New York City, Benzene, both of which were ‘downtown’ art and literary magazines. Davinci was published out of the Véhicule Art artist-run gallery and performance space in Montreal between 1972-1974. Davinci was also, briefly, an imprint for some artists’ publications. It ultimately served to create the only documentation that still exists of some of the artists and authors that passed through that highly creative and important space in the history of Montreal contemporary art and poetry.

Bealy’s career has included solo shows in Canada, Sweden and the US, and he’s participated in group shows internationally. 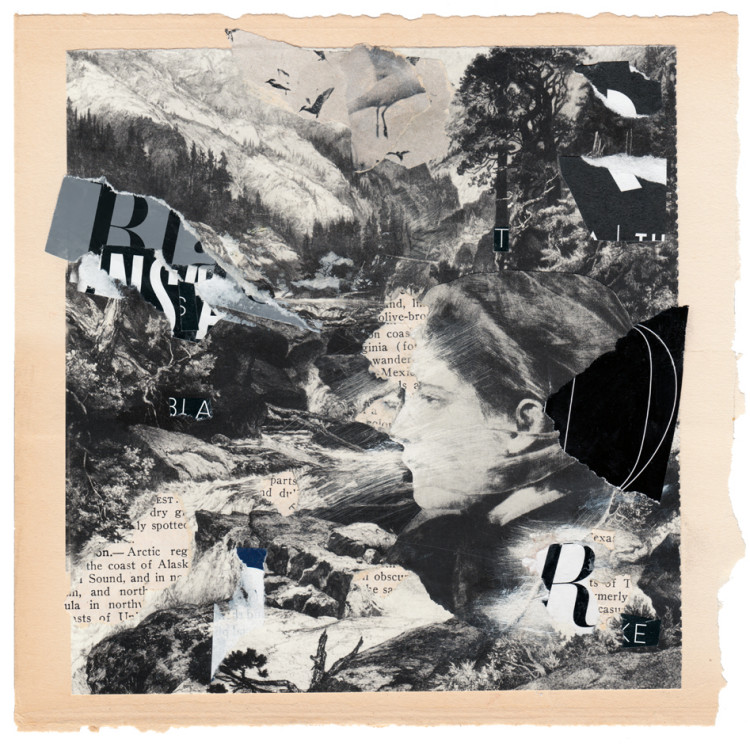 During the last few decades he has worked as an advertising art director in New York, and is now simultaneously embarked on a series of collage projects, both solo and collaborative. He is very active online through his blog and tumblr page; some examples of recent collages accompany this blog post.

Louis Rastelli interviewed him for this project.

LR: Where were you born in Montreal?

AB: Greenfield Park on the South Shore. Art was the only thing I was ever interested in.

LR: How did you discover Véhicule Art? Do you recall your first time there?

AB: I attended the School of Art & Design at the Montreal Museum of Fine Art. Suzy Lake was one of my professors there and we became very good friends. She was one of the founding members of Véhicule and invited me to join soon after. Véhicule was absolutely unique in Montreal at that time, and I spent most of my waking hours there for a couple of years in the early 70’s.

LR: Were you aware of other artist-run centres at the time?

AB: Not in Montreal at first, although there was Optica and I think the Powerhouse gallery soon after that. I knew of artist co-ops in other cities, of course. A Space in Toronto started at just about the same time, and I think is still going strong, as is Western Front in Vancouver.

LR: Aside from Véhicule and the universities, where did you and the other artists hang out?

AB: For myself, there was really only a few years between leaving art school and leaving the city for New York, in 1975. I would spend a lot of time while I was still in school hanging out at The Prag on Bishop. I had a loft space on Craig St. (now St-Antoine) later, which was closer to Véhicule and the Main. There were a couple of burlesque clubs we liked to drink at as well, god knows what they were called.

LR: How did a young artist manage to get by back then? Were you able to afford or share a studio space separate from your apartment?

AB: I was lucky enough to receive a couple of Canada Council grants, as well as getting a modest salary from Véhicule for a while. The prospects for actually making money weren’t great, although, looking back, I don’t think I ever really worried much. If I hadn’t decided to move to New York, it probably would have become more of a concern. My art was never very commercial…I don’t think there was ever much of a chance of making a living by it. 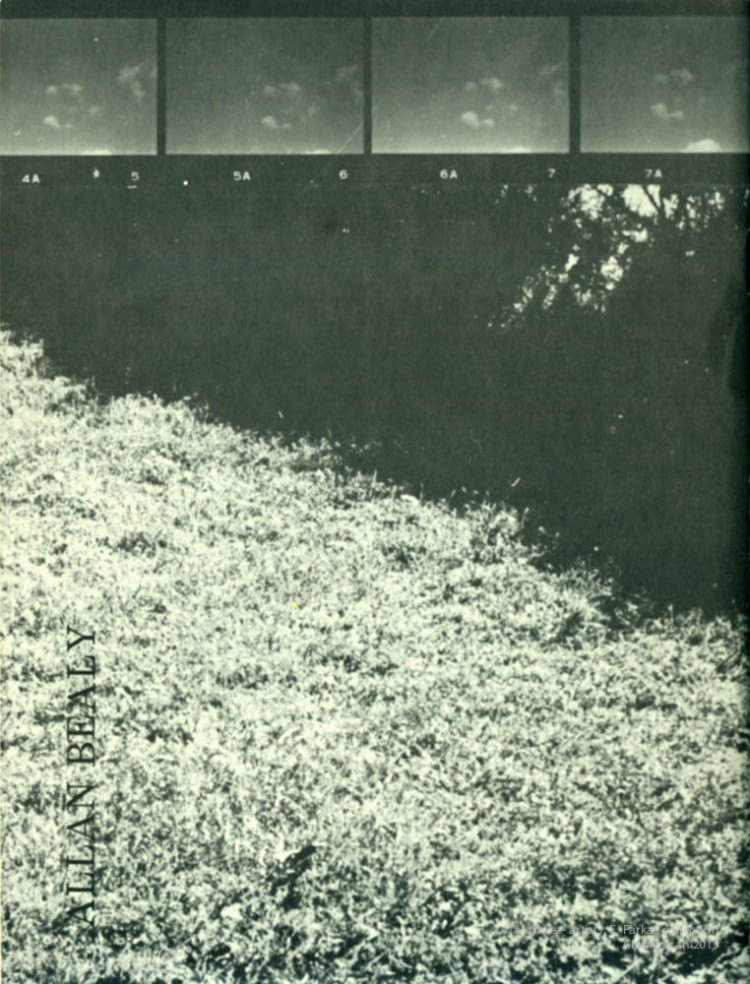 LR: Did you come up with the title and concept for Davinci? How did you settle on that title?

AB: Artists publications and ephemera were always at the heart of my practice, as well as graphic design. When Véhicule started their own press, it was the perfect opportunity to get involved. I designed a lot of their posters, flyers and chapbooks, and seized the chance to edit and publish Davinci through Véhicule Press –actually before they were called Véhicule Press. The concept was to solicit art and texts from around the world from contacts I had made through the gallery as well as through my mail art practice. There was no shortage of incredible talent willing to send me work.
Leonardo Da Vinci, the man, was such a polymath and a genius in so many disciplines that it seemed a good fit to name a little magazine covering so much disparate ground after him. Just to be perverse, I spelled it as one word.

LR: Were you aware of the other underground publications of the era?

AB: I actually think there were quite a few. I wouldn’t really characterize Davinci as being all that ground-breaking. I couldn’t name names though.

LR: Davinci definitely seems to prefigure the “zine” trend of the later 1970s – 1980s, meaning, small self-published periodicals where each contributors more or less has full control of a few pages. Were there similar art zines or publications that inspired you? Were you aware of Ed Ruscha’s work?

AB: I think there was an economy of scale that we were conscious of in terms of size and format. I do remember thinking that I wanted something that could fit in a pocket. I’m not sure why I thought that was important. I knew, of course, about Ruscha’s publications, but I was always a fan of City Lights Books Pocket Poet series, and that may have had more to do with our format choice.
Actually, when I got to New York, my wife and I published a newspaper format arts journal called Benzene (1980-85), which was a lot closer to the vision I had for such a publication — much more space and a more contemporary mix of writers and artists. We published Benzene until about 1985 and I still use the Benzene Editions label to occasionally publish artist’s books and such. 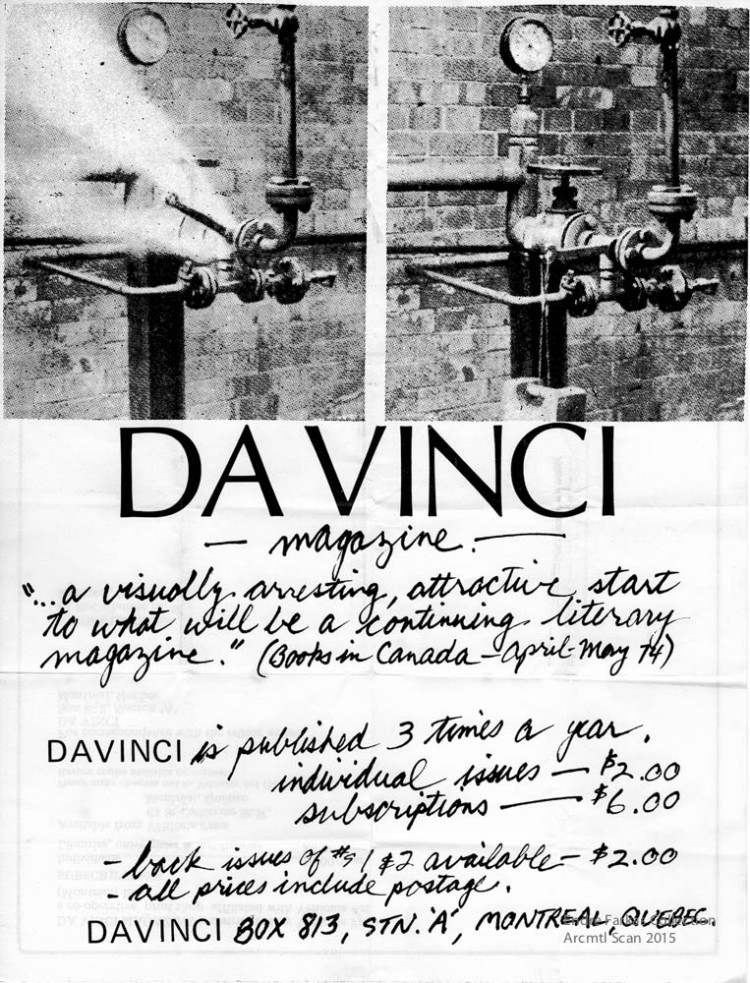 LR: I wasn’t old enough to know Montreal’s art scene back then, but flipping through Davinci feels like being immersed in a wealth of experimentation, not know what the next page will bring – collage, text, manipulated photography, hand prints … Is it safe to assume that the variety of art presented at Véhicule during exhibits or performances was as wild, exploratory, surprising as any given issue of Davinci?

AB: This is exactly right! Véhicule was directed by a group of wildly talented artists who were each given the opportunity to present works by artists from around the world — art, music, texts, readings, performance, the scope of the work was truly inspiring. I’m saddened to think there may never be a complete archive of these materials.

LR: At least we have some documentation and these four issue of Davinci … How did you go about putting it together – was it your initiative, or did a few artists decide to do it?

AB: It was my idea to start the publication, but it could never have been done without Guy Lavoie, who ran the press at Véhicule at the time.

LR: Did you send out a call for submissions (by mail) or posted one on bulletin boards, or was it word of mouth through Véhicule Art …

AB: A lot of the content was solicited from the artists and poets that gravitated to Véhicule then. All of the international submissions were, of course, done by mail (no computers, no email, no digital files!)

LR: Did you give contributors carte blanche or propose themes?

AB: The artists had complete control over content. That made me a little uncomfortable a couple of times, but there was never any thought of censorship. 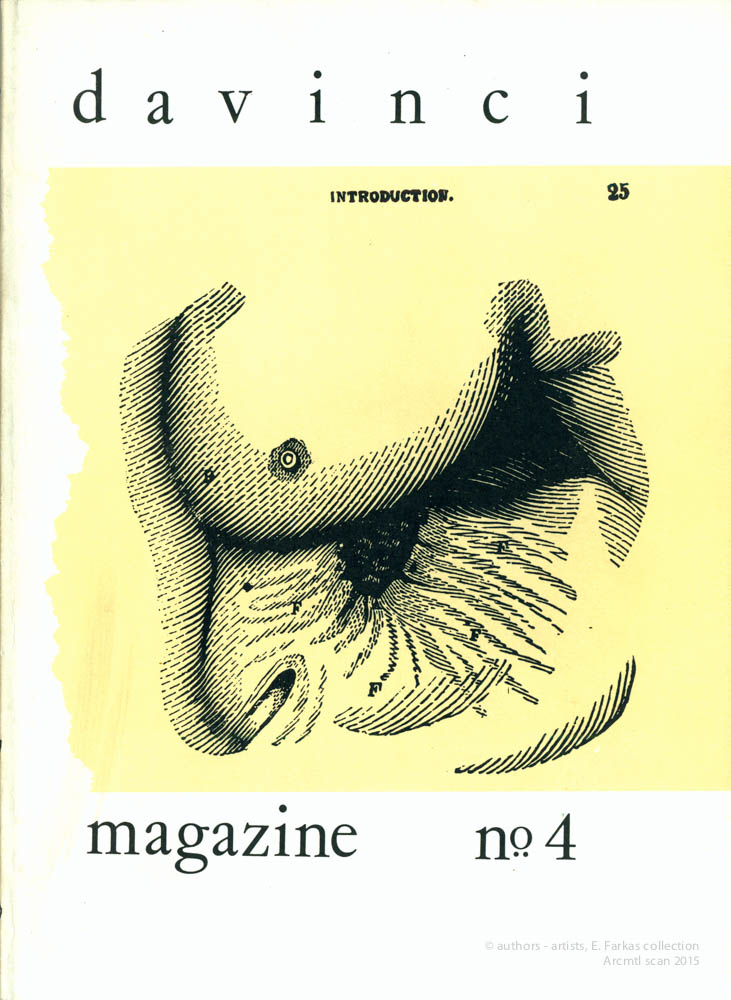 LR: I’m also curious how you produced the issues – were they all printed on Véhicule’s press, did you share the task of collating pages – stapling, or did you pay the going rate to have them print it?

AB: The issues were laid out and printed at Véhicule, but I think they were bound by an outside firm. The press received grants to run, and Davinci was one of the beneficiaries of that system. It cost me nothing and of course did not depend on sales. I was actually already living in New York when we published the last issue. That issue would not have come together without the support of Guy Lavoie and Si Dardick.

LR: How did you distribute it after that? Were copies sold in the same places that Véhicule poetry chapbooks and publications were sold?

AB: Well, it was not a huge run, but they all seemed to get distributed eventually. I have very little recollection of how that worked! It was always “on to the next project!”

LR: I presume contributors were not paid but got a quantity of copies of the issue for themselves?

LR: Did you mail copies outside Montreal?

AB: Yes, of course to the contributors and I imagine I sent a bunch out to people in the network.

LR: Do you know if the original submissions to Davinci were kept or returned to the artists after each issue?

AB: No, I don’t believe work was ever sent back but, I am sorry to say– as far as I know– none of that original work has survived.

LR: Do you recall similar publications coming out in Montreal at the time — visual art based, experimental, including on the francophone side?

AB: I can’t remember any publications quite like Davinci, but there were any number of journals that were essentially literary with a scattering of visual material. Very high-brow, we were bottom dwellers! A little bit punk, a little bit DIY. One big influence however was Bill Vazan, who was an artist-member of Véhicule and had done two book projects that solicited participation from artists around the world. One was called Contacts– both were single issue projects that made a lot of noise in the art world at the time.
Tom Dean was a member of Véhicule, and I think he actually may have been responsible for getting the press started. Tom created a little magazine called Beaux Arts at the gallery that ran at least two or three issues.
There were actually a good number of francophone artists involved, though not, I think, among the founding members. Of course Rene Blouin was the gallery manager (I don’t remember his actual title), and Chantal Pontbriand was heavily involved. 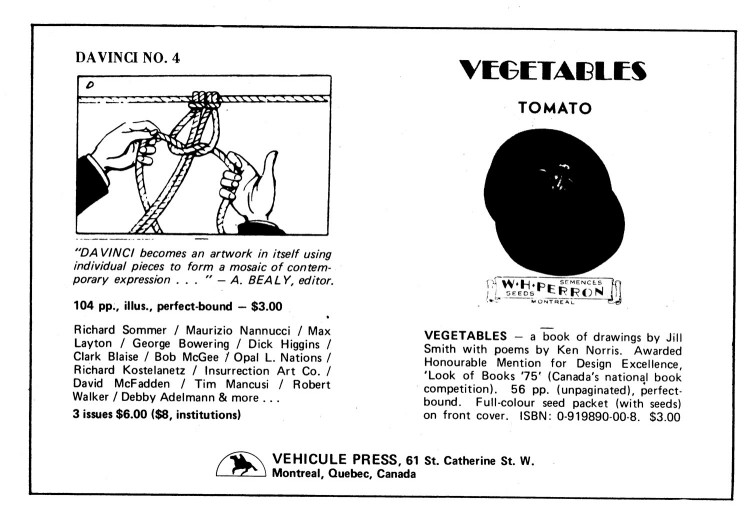