LR: Was that a mixed crowd?

LR: Because I guess at the time, the black communities would have been below Windsor station, near Bordeaux, where Rockhead’s was on Saint-Antoine,

LR: At the Esquire?

ES: I think so, or maybe the Hawaiian Lounge. I discovered the Esquire at the end of the New Penelope era. It was a classier place, it had a sort of New York night club kind of feel to it, and it was obviously run by gangsters, or it seemed to be, which made it all the more attractive in some ways. 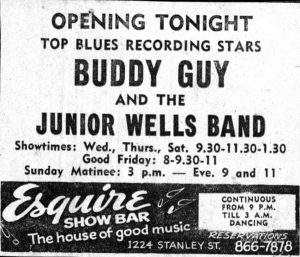 ES: No, bigger. If I remember correctly, there was a dance floor and tables and chairs. You could order drinks to your table, which was pretty classy for us after the New Penelope, where you sat down on benches with a wooden board in front of you where you could put your coffee down. Not that we cared.

There was also a place called George Soroya’s Hawaiian Lounge, that’s where I saw Stevie Wonder, I think. It was almost the same as the Esquire show bar, it may have been on the same street or the same area, I don’t know what happened to that place.

LR: There was also the Kon-Tiki on the same street,

ES: I use to go at the Kon-Tiki a lot with my parents.

LR: I see on the list of shows you kept at the time that you saw Muddy Waters at the Esquire, were you 18 yet by then or would they just never card people for shows?

ES: No, I think they did card at the Esquire. I might have been 18. James Cotton I saw him in quite a few times. And I did become a bit of a harmonica freak; I still have a couple of harmonicas.

ES: I went every day in the summertime. I was 14, I had a passport which was good for the whole fair, I don’t remember how much it was. There was enough to occupy you all day, visiting different pavilions, and there was tons of junk food so we’d eat our brains out. 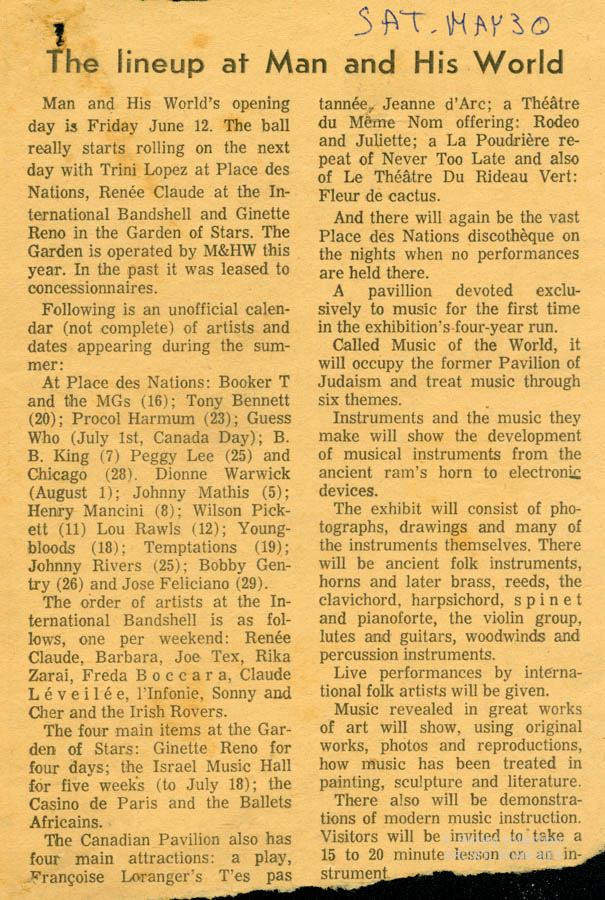 LR: Expo must’ve been like a big playground. I am assuming it was very bilingual.

ES: Hundreds of thousands of people a day were visiting, I was there when I think they had the the most people, I believe it was 400,000 people in one day. It must have been a very mixed crowd.

LR: I haven’t really asked but just assume that growing up, you felt a part of the English community?

ES: I didn’t feel part of any community, but I was obviously part of the English community, as there were just no French people where I lived.

LR: How did you learn French later on?

ES: They taught it very well in school. Extremely well. They taught it by rote. We had to memorize everything, the grammar, starting with avoir et être and memorize all the different passé composé, impératif, futur, présent and then we would just memorize it. The same way we learned math 2X2=4, 4X8=32, I don’t have to think about it, it became embedded and melted into our brains. Once we learned the conjugation of verbs and we started to learn how to use the nouns and whatever correctly within a sentence, we learned it pretty well. The only problem was we had very little opportunity to use the language.

LR: That’s what I was going to say: how do you keep the French then?

ES: I didn’t until I kind of had to relearn it, that base was still there by the time I moved to France for two years, in 1973 or 1974, so I was 20 or 21. I went to a French art school there and was the only English-speaking person. I became totally immersed in the French culture, and strangely enough I had never been immersed in it here in Montreal. Once I came back, it was easy to know connect with the French community, they made fun of my French accent when I came back here. I lived in the South so it was a Provencal accent. In my twenties, I started to connect with French people and moved to Mile-End which was multicultural at the time, you know, Portuguese, French, Greek, English, it was a bit of everything. And often now, I’m stuck in these situations where I may be the only Anglophone. I don’t understand everything that goes on because there are some phrases that I am still learning and my learning curve is pretty flattened out at this point in my life, but most people say to me: Oh, you speak French very well. As long as you do the best you can, they will usually switch to English if they know you made the effort to speak French. That’s why I could never understand these English-Rights groups.

LR: If the point is to preserve the right to live in English only, in Quebec, I think that’s ridiculous. That’s the same as any hardcore separatists who believe they need the right to live and do business in French only, ever.

ES: To me, the thought of being an English-speaking person who lived in this city your whole life without being able to speak French is beyond my comprehension. I am very, very, very happy to have a foot in both worlds, and get the best of both. And of course there is much more going on in the French community in Montreal, in terms of the quality of the culture, than in the English community. For instance, I like theatre very much, but the quality of English theatre is nowhere near the quality of the actors in the French theatres. The French actors in Quebec, they have the opportunity to practice a lot, to do TV, to do theatre, to do movies, talk shows, they can work and they can hone their craft, whereas the English artists, actors, don’t have that opportunity, they just have the Segal Centre and the Centaur. I just recently went to the Centaur, and I was very disappointed. And I went with a French Canadian woman… The writing was of a mediocre quality. The acting was also mediocre. I was in fact a bit embarrassed with the woman I went with, because I have gone with her to Théâtre du Rideau Vert, Nouveau Monde, you know, good theatres, and seen stuff really as good as you can see probably anywhere in the world. This just didn’t measure up. It was sold out, but when I looked around in the theatre I thought: I don’t really want to be a member of this club. Because it did seem like a private club in a way.I don’t want to be lost in that bubble. That’s what I like about living in the the Mile-End, the Plateau…it’s really nice to be able to have the opportunity to experience a lot of different cultures, it’s just a wonderful part of living. 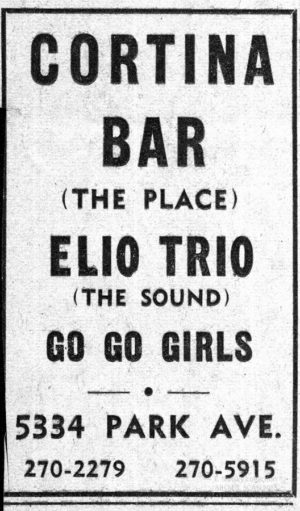 Another clipping kept by Erik Slutsky from a show he attended in the late 1960s.

LR: Do you feel like that’s something that you saw change in Montreal– before you went to Expo 67 every day that summer, I’m guessing that Montreal until then wasn’t exactly the most multicultural place. Then by the time you came back from France, six or seven years later, it must have felt like things were changing?

ES: Well up until a point, up until I’d say the first referendum, that was 1980, I guess, the main thing was you had English and French. We didn’t talk about the Muslim community or the Black community… Now we have a huge Arabic community, huge French from France community, gigantic South Asian community… all of them have introduced their cultures and as they built their wealth, their influence grows outside of their community. For instance, the Filipino community, which began small as a bunch of ladies taking care of their children and housekeeping, over the past generation or two, thank goodness, have been able to bring over their husbands and children. Fortunately many have been able to move out of just that trade, and of course, next was being nurses and things like that, opening restaurants and businesses and then, their impact starts to move out of their community and that’s great.

LR: So a lot of Polish, Jewish and Greek?

ES: No Jews. In Mile-End in the 70’s? The Jews had left Mile-End. There were a lot of Greeks. There was starting to be a lot of Portuguese, a few young people like me because I had a place on St-Urbain at 23. I didn’t realized it as much at the time, but for the next 10 years or so Mile-End was in a real decline. A lot of buildings were being burned down by landlords, rents were ridiculously low, businesses just didn’t work, it’s difficult to think about comparing to what you see today but you know, Brooklyn went through the same kind of cycle.

It had started a lot earlier in Mile End. In 1954, in the area bordered by de la Savane, Victoria and Jean Talon, they built 500 houses. My dad and many of the people from St-Urban Street and Clark bought all the 500 houses in one day. All you needed was $500 down. They all borrowed money from somebody else, put the $500 down and then it was like $39 a month mortgage for 25 years or something like that. The house was $12 500.00. So they all sold in that same day, and it was all guys who knew each other from the old Jewish neighborhood. They all had their first kid around 1953-54 and most had another one around 1957. So I had 500 friends, immediately.

LR: Did your parents find that to be strange at all, when you moved back?

ES: No, my dad loved the old area. There was nothing like it where we lived, out in Western Montreal. They built it all out of nothing, of old farmland.