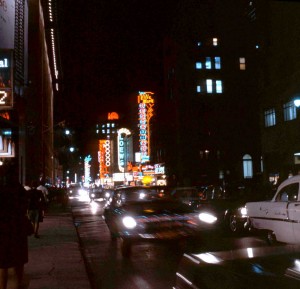 Before the mid-1960s era of rapid change, the early 1960s in Montreal were in many ways a late phase in an era that began with WWII. Nightlife remained rife with questionable characters to this day, but the experiences related here were from a whole other world. This anonymous interview with a lifelong Montrealer was first published in Montreal’s Fish Piss Magazine, Vol. 2 No. 1, 2000.

R: So this was in 1962, in Montreal, Canada. It was on Ste. Catherine Street on the corner of St. Denis right in the neighbourhood where all nightclubs were in those years. There was about forty-five in that neighbourhood in a four-street by eight-street area. I had quit my job at the transport company and I was looking for a job, so I walked to a small nightclub called le petit Versaille.

It’s mid-august and the man tells me that he has problems because the place stays empty, he doesn’t know what’s happening, and I realize the man is quite discouraged. He’s trying to make the place go, but a few things have happened and he has a hard time to make it go. I was too young at that moment to understand that he was stopped by his fear, but in later years I have understood that it was his fear that was stopping him from doing what he wanted to do.

So I took the job as an administrator and within a few weeks I had some shows organized like every nightclub in these years, three shows a night at 8, 10, and 12. You know, dancers, singers, strippers -but not as today, no naked bodies- jugglers, you know, a real vaudeville show, three times a night.

So, the place starts going well. The end of August there’s a man who walks in, he’s from Toronto, he’s about 28-29 years old, he’s a pimp. He has two or three girls working for him on the street, in brothels, or wherever he wants them to work. So he wants us to take the three girls into the bar so they can work from there, I didn’t want to. So he tells me that they’re dancers, so I don’t mind putting them in a show and paying them $75 like everybody else.

FP: Every performer got paid $75 a night in those years?

R: Sure man, that was the minimum! Anyway, that wasn’t good enough for this man from Toronto, he wanted control of the club. I told him very plain before the end of the first week that we didn’t need him anymore and that’s it…

The next Thursday I arrive at the club at about 7 in the evening. As I begin to turn the key in the door suddenly I hear a gun blast behind me. The door was within an alcove, and the bullet came… it was a passing car, someone shot at me from a car passing in front of the nightclub, the bullet hit the wall at my left, passed right in front of me, hit the door, which was a big oak door, rebounds again on my right, and fucked off back up the sidewalk. I didn’t get hurt, so I just walked in and that was it, you know. But I knew there was a message there. If you shoot somebody in the street, you shoot for real. When he missed it was because he wanted to miss, but the message was clear, maybe he wanted to injure me a bit, anyway.

So he says, “if you want to keep your job we have to see colours”. I said “what do you mean?” He says, “well, the colour we like is light orange or light violet”, which of course was the colour of 50 and 100 dollar bills in these days.

I said “oh yeah? How many times?” “Once a week from everybody” he replied. I said, “man I don’t know your name, but the only colour that suits you is lead grey”, and I just hang up.

Telephone rings back again about two minutes after, it’s the same man that tells me that he’s going to come see me the next day and we’re gonna… “O.K. man”, I say, “if you want to play cowboy, I’m willing”, and I hang up.

So the next day I had all of my crew in the place, I had four people working for me plus the owner, Marcel. Luckily, or unluckily, I was collecting guns in these days. So I took a bunch of my guns, I had my firearms permit, and I took all the guns down there and I gave each one a gun, and set a strategy in place because I was expecting a clash.

So, we were all placed, and at about 7:30 on the Saturday four of them show up, and they were big mobsters, known Montreal people, O.K.? No names, but they were the upper echelon. It was the capo of one family, and his lieutenant, and two very well known goons. They are sitting at the bar, and I realize that I know two of them personally, they are not my friends but I had been presented to them once. I was running in nightclubs at this time and I knew the neighbourhood.

So they ask Lucien behind the bar to serve them double cognac. So Lucien goes and begins to get the drinks ready, he knows who these men are by sight also, he doesn’t know them personally, but he can tell they are serious because of the way we all reacted when they came in to the bar. All my people had gone to their positions and clink-clink, got their machines ready in case of.

So I am sitting beside them at the bar, and I’m watching their hands, this is the only thing you can watch in this situation. The man right beside me is the one who is known to make the first move if something is going to happen. Lucien is asking them for the $4 for the cognac, and one replies by giving Lucien the finger and saying “it’s on my arm.”

Lucien says, “no, no you have to pay”. At that moment the man beside me put his hand in his coat pocket, I wasn’t taking any chances so I pulled my gun and yelled “freeze”. All my people pulled out their guns and these four guys had their faces full of guns pointed right at them.

I turned to the capo that I knew and I said, “just because we are loners and we have no big gang behind us don’t think you can come in here and do what you want to do”. So we shouted at each other for a couple of minutes. Then the other one, the real leader of their foursome, realized that it was not worth it, that we really were ready to play cowboy with them, we were as crazy as they were, as dumb as they were, or as violent as they were, if needed. So he pulled out the money for the cognac and paid it, and then they left.

The next day, Sunday, two of them are back with two other guys and they’re sitting there. We had just opened the club for the evening, so Marcel tells Lucien to go and serve them at the table. We gave them the best seats, what we called ringside, they were beside the stage.

Marcel goes to see if they want to eat anything, as we had a small concession in the back of the restaurant. So he shows them the menu, and they ask for four Caesar salads. So Lucien goes back to make the order, and I ask him what they want and he tells me salad, O.K. They were there as customers, there was nothing we could do, they had paid their booze to Lucien etc. I told Marcel, “I’ll go serve them myself”.

So he prepared the salads and I took them on a tray to the table and put one salad in front of each. I was looking right in his eyes the whole time. They asked me, how much do I have to pay for the salad? I said, “Usually we are selling it for $2, but for you it’s $2.50”. He looked at me, smiled and said, “Fuck you have guts, you have guts little kid”. I said, “That’s business, as you do it”. So they stayed maybe for twenty minutes, they ate their lunch, and then they left.

Through this whole weekend I didn’t see the pimp from Toronto, but I knew it was him who was behind all this bullshit. The capo had talked to me straight and he was recognizing my guts and that was it. You do your thing and I’ll do mine and we keep the police away. Otherwise, bing-bing-bing, everybody goes in eh? You have to be aware of these things in business, nobody shoots for nothing.

Monday night I open the club and everything goes well, it’s quiet. Tuesday night I came, I went to open the door, the same place that I got shot at. I’m not always concentrated, checking everything out, I’m not paranoid by nature, so I just walk by the door, getting ready to open it. While I’m opening the door, I hear the noise of a car, whoom-whoom, idling.

Since I got shot at about a week before I’m getting a little bit more aware of these sounds. To me it sounds like a car that is going slow, maybe they’re going to try me again. So I put myself right up against the door and look out on to Ste. Catherine. The car is parked right in front of the club, the motor is idling, and there’s a man holding the steering wheel, with his head on the wheel, and two bullets in his head. I looked down, and saw that it was the pimp. It was then that everything made sense.

He had gone to the Casa Loma and told them that he had control over me and the club and they were going to take it over, etc. The chiefs didn’t like it that this man from Toronto, a newcomer, came and tried me without their consent. After he felt that he had threatened me and terrorized me enough to have control over me, he went and told them about that. They came to support him, but the pimp ended up making fools of them all because we were stronger than the pimp had said. In order to let me know that everything was O.K. they delivered the body to the club. About ten minutes later I heard the sirens outside and never heard of it again.

If you want to see the bullet hole, you can find it on Ste. Catharine at St. Denis beside the (in 2000) recently closed Poulet D’Ore.