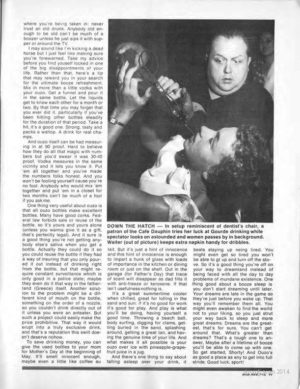 JR: Yeah, he knew exactly what he was doing, and he was good, he was really good. So I did all those magazines. Meltzer put out his own magazine, which was called Ajax, he printed it on the Xerox machines at Columbia Records, about a hundred copies each, they were quite thick. He printed an article that I wrote called “Neil Young’s Father,” about Scott Young. He was a sports journalist and he was Mister Toronto. Mister Upright. He even held his head up like that, Mister Upright couldn’t stand this rock and roll stuff, and when Neil’s amp blew he refused to pay for Neil’s new amp. Scott Young wrote a book called “Face Off” that became a Canadian movie and it was about a young hotshot who falls in love with a female rock singer, and suddenly in his rookie season, he’s burning up the league and this rock singer turns him on to bad habits. He gets benched and stuff like this, they’re in the playoffs, he goes on the ice, scores like crazy. In the meantime, his rock star girlfriend dies of an overdose. So he leaps onto the ice, “This one’s for her,” it was such a piece of garbage, you wouldn’t believe it. It was a failed critique of his son, obviously… I couldn’t stand Neil Young, and I still don’t like him very much… I still can’t stand the voice, I can’t stand the whining, “Helpless, helpless, helpless,” and “A maid, a maid, a man needs a maid,” I just found him so puerile and stupid, “Old Man” obviously about Scott Young. I just couldn’t stand him. And there was one show I remember, I would always watch the shows from the side of the stage, because I’m a little bit claustrophobic and I don’t like to have a seat right in the middle. So I watched Neil and his band come out, and they were absolutely stoned to the gills. Meanwhile some kid in front is saying, “Neil, Neil, Neil, can I have your autograph?” He was zoned out, would not acknowledge the fan at all, you know? That was a bad review. Another bad review I did was of Led Zeppelin.

DD: That was famous,

JR: I basically said you see the first ten minutes of them and you’ve seen the whole show, because it’s just constant repetition. They stayed overnight and they saw my review, and they went through the local CFCF Channel 12 and complained, and Channel 12 put them on the news! There was Robert Plant just wailing away about this review, (British accent) “This piece of shit man doesn’t know what he’s talking about!” (Laughter)

LR: You’re raining on their parade…

JR: Absolutely. Raining on their parade indeed. I’m told through a fan site that it was the worst review that they ever received.

JR: That’s a badge of honour. Not long ago Robert Plant was in town with Alison Krauss for the Jazz Festival, and I met him in the press lounge. Now, I loved the album with Alison Krauss, I thought it was fantastic. And we were introduced, and I said to Robert, “That review that you got in Montreal when you first came here, that was kind of rough, don’t you think?” He nodded and I said, “Yeah, I wrote that!” (Laughter) And he smiled and he said (British accent) “Nice to meet you, glad that we’re still both hanging on,” it was kind of funny.

LR: I’ve been asking everyone we interview for this project for their memories of the mid 1970s, sort of a turning point and ending for the era that began in the 60s, especially with the election of the PQ in 76.

JR: I was on Mont-Royal on that Saint-Jean Baptiste Day just before the Parti Québécois came in. The fires were just raging, and of course we were fucking stoned out of gourds, weaving about– it looked like Dante’s Inferno! Multiple bonfires, people would put stuff in trashcans and set them off, boom!

LR: Were you there at that show, the infamous first time they sang Gens du Pays…

JR: Absolutely, I was at that show. You see, I’ve always been very sympathetic to the separatist cause, because I think that it is, de facto, a country with its own language. So I never had any qualms about separatism per se– the qualms I always had were how are they going to treat the Inuit, for example? You can only take a measure of a society by how they treat the “other.” And this was the big test. And I originally thought that the Quebecois would pass it; now I have my doubts. They’re kind of stuck with the “other.” It used to be the Haitian influx, but now it’s the Arab influx. And there’s less and less Pure Laine Quebecois.

LR: What about the Franco music scene at the time? 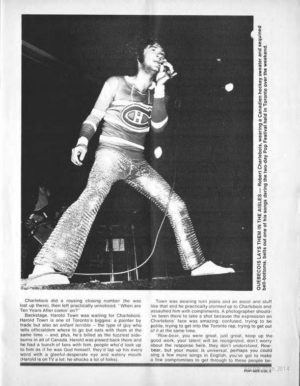 Robert Charlebois in a 1971 issue of Pop See Cul

JR: Keep in mind that anybody who played during those ten or eleven years I was on the beat, I had to see them, no matter who they were. And it was three, four concerts a week. I reviewed Jacques Michel, I did Claude Dubois, everything. I didn’t understand hardly a word they sang, but they loved that the English were taking notice of their culture. They just loved it. It was definitely a big deal for them. I’ll always remember in 1973 when I got to know the Ville-Émard Blues Band, which was an amalgam of groups… one of them was Robert Charlebois’ backing band. Charlebois and the group were going to France for the first tour since Charlebois kicked in the drums at the Olympia, when the French called them “Les Sauvages d’Amérique du Nord” and so on. They were finally going back, and these guys from Ville-Émard, said “why don’t you come on over and meet us” at a certain town? We met near Geneva. Christian Saint-Roch was the drummer, a great drummer, he gave me a piece of dark Afghan hash, like that big…

JR: Yeah: “That’s for you, man, to enjoy the trip,” you know? And we went around France; it was like “The Magical Mystery Tour” you know? Had a lot of fun. I was the instigator, sort of, of getting that band together as the Ville Émard Blues Band. Very, very unwieldy, eighteen people, all these different styles. They did perform at the Théatre Saint-Denis to a packed house, but it was very difficult overall. Player’s cigarettes sponsored a Quebec tour, but they were an underground cultish type of band. I wrote the liner notes for their first album. I remember one of their fans was Robert Lemieux, the lawyer for the FLQ. And I remember after one of their shows at the Paul Sauvé Arena, they ripped out these planks of wood and we played hockey with a beer can, the referee was Robert Lemieux himself, the separatist lawyer. A lot of good times. I did a lot of drugs with them. The best mesc… And even in Paris, Bill Gagnon, the bassist, he was a wild, wild, wild bassist! Very, very good, I thought. He gave me some sort of sleeping pill for Paris, and he says, “Now, we gotta fight it. And if you fight it, if you fight it, you really get high, man!”

LR: If you don’t fall asleep…

DD: Can you talk a bit about your history and relationship with Pag (Michel Pagliaro)? Because I know you’re very good friends …

JR: I discovered him in the early seventies… I knew the English hits, then I got into the whole catalogue. He had a studio in Old Montreal, and he was getting this coke, it was just unbelievably good coke. We would talk all night, all night, he would play me tracks and tracks and tracks. He would come over to my place too, I lived on Atwater, stay the entire evening, and then be able to sort of drive home very quietly in his Cadillac, very calm. He was very, very hot at that time, hit-wise, spent many, many nights in the studio. I’ve often thought that he was best rock and roller that I’ve ever heard, actually, when he was in form. I thought that his last full album “Sous peine d’amour” was a beauty. Incredibly, incredibly good. But something about Pag, either he didn’t have the right management, or there was something gun-shy about him. He went out to LA, Meltzer met him, Meltzer adored him, was willing to do anything for him, and somehow the connections weren’t there. Now, I don’t know if it’s the mob or something, but the connections just didn’t happen. Those hits that he had, the English ones, “Some Sing, Some Dance,” “Rain Showers,” they were played on the East Coast radio stations. They were sort of cult hits, but they would get to, like number thirty-six, or number forty-two, and he had a base there and all the critics, all of my gang, the people that I knew, they loved him. “Give us more, give us more!” And it just didn’t come together for some reason. Why, I will never know. I’ll always remember, we went to a hockey game together in 1976, and this was the night that the Parti-Québécois won the election, it was Montreal versus the St-Louis Blues, but along the little strip there, where they had the scores running past, the vote tally was coming in every ten minutes. Pag, at the end of the hockey game, said, “Shit, man, it’s all over for me here. It’s all over.” And we said “Let’s go to Marty’s place,” Marty Simon, the drummer, he had a place on Stanley Street. Pag takes a huge bag of coke, I mean a real big, big baggie of coke, fantastic stuff, puts it on Marty’s coffee-table, and we wouldn’t leave until we had done the whole thing. And it was big, I can tell you. He feared a backlash because he wasn’t Pure Laine, and that was a really important thing in those days– you know, there were whole careers built on being a separatist artist.

LR: So you saw the big exodus?

JR: Yeah, sure, I mean, I did move to Toronto when The Star was on strike. I became involved in a couple of Canadian magazines, trade magazines.

DD: Political-wise, how did that feel? Being in Toronto back then, it’s like a weight that’s lifted off your shoulder…

JR: Well, I hated Toronto, I hated the lifestyle. I lived there because my friend Chris Haney who was co-inventor of Trivial Pursuit, he was a colleague of mine at The Gazette, and said “Give Toronto a chance, give Toronto a chance.” It was a tough time there and he said, “Juan, if you take this shit, you must really like it.” (Laughter) And he said, “I’m going anyway, but if you quit now, I’ll quit with you.” And I went upstairs, and I quit, but I gave them two weeks notice, and they had a security guard sitting right next to the desk and it was called “The Juan Patrol.” (Laughter).

Then as soon as The Star came back, I moved back.

LR: But then you realize you’re in Toronto… 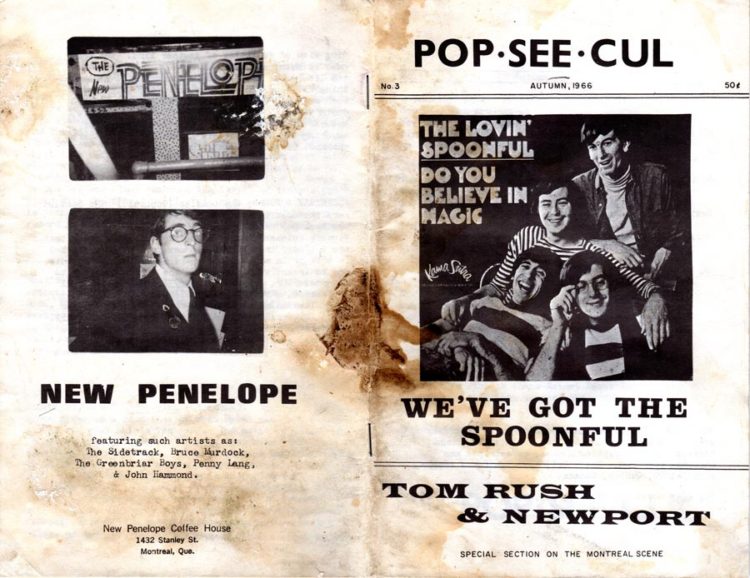 (Editor’s note: The Montreal Star went bankrupt and closed not long after its strike, and Juan Rodriguez has written regularly for the Montreal Gazette ever since.)