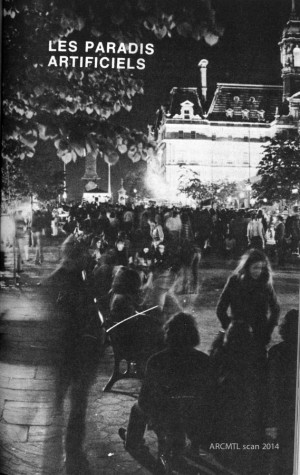 If we look at the headlines that appear regularly in our newspapers, one might think that Montreal is the drug capital of North America.

It is not. For over twenty years, because of the proximity to the huge US market, Montreal is the preferred entryway for specialized couriers that service the international networks of narcotics traffickers. Heroin enters by the pound and leaves almost immediately in direction of the USA.

As strange as it may sound, until the mid-sixties, any kind of drug consumption was reduced to an absolute minimum in the metropolis.

We have to wait for the post-war baby boom and the Quiet Revolution under Jean Lesage for Quebec to breach the unreal.

Even today, while a parallel civilization really exists, heavy drug use such as heroin and cocaine remains extremely limited.

In fact, in Montreal, unless you have safe entries in these special milieus, it is almost impossible to get them. And fortunately, since the use of these extremely harmful drugs is particularly dangerous for the uninitiated.

However, the dream world has an appealing side for the tourist and making a small incursion in that world is the easiest thing.

When talking about drugs, we often forget that most of the Quebec population makes everyday use of it. The parent who freaks out because his son smoked “mari” or “hashish” should remember that the “dry martini” he drinks every lunchtime or the beer he has at the tavern in the evening, contains one of the most harmful drugs that exists: ALCOHOL.

It’s the same one that causes the most havoc in Montreal. In the long term, the abuse of alcohol causes a strong physical and psychological dependence and leads to an array of diseases ranging from liver cirrhosis to delirium.

The only difference between alcohol and minor drugs is that the first is socially accepted and it brings in hundreds of millions to governments every year, a sum that they pocket unscrupulously.

In fact, adults who love booze as much as young people like smoke a joint become real druggies when they start to drink abusively.

We will soon realize that the “world of the unreal” is quite special indeed. It has its own vocabulary and it is absolutely necessary to know it before you venture in it.

The important thing is to be “cool”, that is to say, to be in line. While we review this quick glossary, we would like to take the opportunity to generally describe the effects of various drugs that are found on the market.

In the first category we find heroin, morphine and codeine, which is called “H” or “Horse”. These are particularly dangerous drugs because they create both physical and psychological addiction.

Normally users inject several times a day. To do this, they use a small spoon and a hypodermic needle. The drug is placed in a spoon, water is added and the mixture is heated with a match to accelerate dissolution. Using a hypodermic needle, the solution is directly injected into a vein. This process is called “mainlining”. It is extremely dangerous. In all its forms, injection, pill or even cigarettes, these drugs are addictive and should be avoided like the plague.

Many American soldiers who had taken the habit of smoking “smack” in Vietnam (smack is a cigarette made of a mixture of marijuana and heroin) realized, to their surprise, that they couldn’t do without it. And they had to undergo rehab at the expense of Uncle Sam.

Fortunately for Montreal, as elsewhere in Quebec, this type of drug is almost non-existent. In any case, you should never use on any pretext whatsoever, and we must fully support the efforts of law enforcement that prevented this vile trade get a foothold here. The “shot” of heroin, the pill of morphine or codeine sell for between $5 and $15 per unit and an inveterate addict needs more than $50 per day to satisfy his habits. So it is a very expensive game to play in addition to being a very dangerous one.

In Montreal, unlike what happens in most major US cities, it’s marijuana that has popular support. It is common to smoke a “pot joint” whatever the situation.

Fortunately, cannabis satyva (marijuana’s scientific name) does not create addiction and the Ledain Commission, after an exhaustive study of the subject matter, almost recommended its legalization!

Marijuana, just like hashish – which actually is only a concentrate – normally causes a feeling of calm, euphoria or well-being. And we can smell it in every corner of the metropolis. Its use is so widespread that it is impossible to control.

Marijuana enables extra-sensory sensations that bring up an intellectual expression that seems deeper. It has an especially huge advantage. Unlike alcohol, “mari” does not cause aggression and there’s no hangover the morning after!

“Hash” (pronounced in the French way) is much more powerful and essentially has the same effect. If we use it with too much enthusiasm, however, it can cause much more profound effects comparable to those of hallucinogens.

A marijuana cigarette is called a “joint” that one “tokes” normally in groups. It is common to pass a hit to one’s companions. Marijuana is an extremely dry grass and it burns very quickly. That’s why we pass the “joint” around. So all can enjoy the effects of the “dream herb” and it’s a great opportunity to meet people.

Regulars love smoking “bombs”… cigarettes that contain half hashish and half marijuana. Two of these cigarettes produce a powerful “high” for three or four people. The euphoria is quickly reached and maintained for three or four hours long. We remain high until the down happens.

During the “high”, one perceives everything differently. Music, colours and sounds take on a new dimension.

A “dime” of marijuana or hash sells between $8 and $10 and it is extremely easy to get as “pushers” abound in every corner of the city.

Modern pharmacology makes thousands of medicinal products available to the general public. Priced out of context and in massive doses, these pills produce very special effects that are sought after by thousands of users. Whether it’s “goof balls, speed or crystal” these pills are quite dangerous and cause unpredictable reactions.

In the atomic age, chemistry has almost no secrets anymore and it’s now within the reach of any student to make “acid”. This is LSD 25, a chemical formula courtesy of the high priest Timothy Leary. This hallucinogen like STP, MDA and mescaline directly attacks the nervous system, impeding its normal functioning and causing hallucinations, delusions and feelings of depersonalization. LSD trips last between 6 and 12 hours and we must be careful because these powerful stimulants may cause severe anxiety and panic attacks if the atmosphere is not conducive.

These hallucinogens are not recommended, and if you ever have the opportunity to read evidence presented before the courts it might convince you not to try them. In one case, analysts found LSD cut with strychnine, a very powerful poison.

About ten years ago, only jazz musicians and a few insiders knew about marijuana. This lasted until the hippie doctrine settled permanently in the city.

The “flower philosophy” made the search for truth and the unreal fashionable. At first, the followers of “marijuana and LSD” pushed their experiences to the limits in order to reach new intellectual heights. In fact, these minor drugs were the panacea of those who thought and wanted to create a new world from a nonconformist philosophy.

At the time, these people met in small cafés on Clark Street near Sherbrooke. You would go to the El Cortigo and the Paloma like you’d go to the church. We went in search of the one truth. This only lasted for a time. Then came the era of the little Hutte where the first pushers dealt on the streets. Although at that time, the number of regulars was much smaller.

Then the little marijuana leaf blithely crossed a border. The market developed rapidly. Sources became more numerous. We then embarked on importing on a large scale. Fans could sample the delights of the Jamaican “ganja,” the Colombian green tobacco before the illegal trade experts realized that it was much easier to import hashish, a concentrate that takes up a lot less space.

It was then that the “Lebanese Gold” appeared on the market, followed by the brown hash from Kabul, Afghanistan. All the tricks were used to thwart customs… tables carved from solid hashish, goatskin coats literally packed full of hashish, etc.

Recently clever smugglers discovered a sensational trick. They imported no less than a ton and three quarters of pure hashish hidden in cans containing apple compote from Lebanon! This drug had cost them more than $200,000 but on the streets, they could make more than $5,000,000! Alas, someone snitched on them.

Needless to say that such profits can tempt the devil! People don’t hesitate to play the big game even if they risk minimum seven years in prison if caught.

Meanwhile the founding of the Carré St. Louis republic took place and the use of marijuana and hash proliferated so rapidly that the legislature had to amend the law. Too many sons of good families and too many businessmen were likely to wake up behind bars. Now, the simple possession for personal use of this minor drug can lead to mere a fine between $25 and $100, whereas before, the court was free to sentence the offender to six months in prison.

This amendment was necessary because many people, in all classes of society, now take marijuana and hashish. This is the fashionable drug in high-class lounges and posh nightclubs. And we can get them without great effort in every corner of the metropolis.

For those interested in the hippie world, there are currently three centers of interest in Montreal.

In the west of the city, a peculiar fauna revolves around the sidewalks of Crescent Street. You can meet aristocrats as well as bikers in these nightclubs.

In the east of the city, the hippies came together on St. Denis Street, around the Carré St-Louis, where they founded their own republic. Unfortunately for them, the official army, the Montreal Police, dislodges them every night. Carré St-Louis has a small private side. It is the only metropolitan park that you cannot be found at past midnight!

Finally, there is Old Montreal where all cultures collide. In the evening you can breathe gusts of “mari” around Place Jacques Cartier amid tourists, hippies, intellectuals and bikers who have adopted the neighborhood. This is a place not to be missed.