At our annual Expozine small press fair, specifically on November 16, 2014 a round-table discussion on the early days of the contemporary Montreal small press scene was held.
The panel consisted of the founding members of Véhicule Press, Simon Dardick and Nancy Marrelli, and the founder of Montreal’s long-running independent bookstore The Word, Adrian King-Edwards. 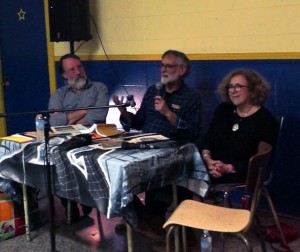 Véhicule Press began in 1973 on the premises of Véhicule Art Inc.—one of Canada’s first artist-run galleries located in what was once the legendary Café Montmartre night club. In 1975 the press became Québec’s only cooperatively-owned printing and publishing company. Simon Dardick and Guy Lavoie were general editors. In the seventies the press distributed most of the small English-language literary presses emerging from the city. Simon Dardick and Nancy Marrelli continued Véhicule Press when the co-operative was dissolved in 1981, and they are now publishing more titles than ever.

The Word Bookstore was opened in 1975 by Adrian King-Edwards, who was already by then an important collector of Montreal small press and self-published publications. It is the oldest running bookstore accepting local publications on consignment in Montreal, having sold hundreds of different titles by hundreds of local authors in its long history. Adrian King-Edwards is also one of the organizers of Montreal’s annual antiquarian book fair.

The following is an edited transcript of the discussion, moderated by Louis Rastelli, co-founder of Expozine and publisher of the noted underground Montreal magazine Fish Piss.

LR: When did you first come into contact with what we can call the small press, self-publishing milieu in Montreal?

SD: I have to say that I’m a refugee from Kingston, Ontario. I came here in the 60s but before I came here, I used to read all the literary magazines and books published that emanated originally from Montreal. I used to read books by Louis Dudek, Ray Souster, books that were created by them under the name Contact Editions. So before I came here I was already prepped and felt that Toronto didn’t have an appeal to me; I’m not Toronto-bashing, it just didn’t have the same literary appeal that Montreal had. So before I got here I was interested in literary things from here. But then when I came here, I guess you hang out, you know? We used to hang out at the Swiss Hut on Sherbrooke Street, not far from the New Penelope, which was a club nearby. The Swiss Hut had a real amazing mix of people, you had political people, you had Felquistes, Union organizers, a literary crowd, just an amazing crazy place. I started to get a feel for a certain scene at that time.

AKE: I also came from Ontario and went to McGill, I started at McGill in ’67 and studied English Literature. And like most English literature students, I wanted to be a poet, a writer. I took creative writing classes, after I graduated I went travelling through Europe. I came back at the age of 21 or 22, and felt it was time to write my memoirs (laughs). I found a little closet on Lorne, in the basement, which had a hotplate in the hallway, and a mattress on the floor, a desk and a typewriter, and I figured I was all set ready to go. The closet was costing me $8 a week so the overhead was really low. I had wisely given up on the poetry – I was concentrating on my memoirs.
Then I got sidetracked, I met my wife and we went off to British Colombia and we spent the summer selling books out of our Volkswagen van. You couldn’t do it in municipal areas but you could do it in places like trailer camps, mining camps, lumber camps and the like. So we travelled through BC selling books. So this was still literary ambition but it was shifted a little.

I came back to Montreal and wanted to start a bookstore, I figured that would be a really fun thing to do, and I found an apartment on Milton Street, immediately next to where the store is now for $100 a month, it was a 4 and a half. I haven’t checked lately but I think it’s gone up quite a bit. All the doors along Milton Street were the same and we both had been in the English department and we wanted to appeal to students at McGill to come and buy second hand books so we put a picture in the door of George Bernard Shaw, which indicated that that was the door where the cool underground bookstore was.
People started coming, it was very popular we really enjoyed it. We really wanted to connect with the poetry community and this was ’72 ’73 that was exactly when things were starting. We just coincided exactly at the right moment.

One day Fraser Sutherland, who was the editor of Northern Journey, came by, he’d been sent by Mr. George at Argo – Mr. George is certainly one of my mentors – and he wanted to know if we would carry Northern Journey. At that point I figured we had totally made it, we connected with the literary scene.

We went on from there and had poetry readings in our apartment above once every two weeks. To the point where there were so many people coming and going that one afternoon two policemen showed up and we got raided. They went through all the spices in the kitchen. One of them got bored and ended up lying on the floor in our closet playing with some kittens that had just been born.

Anyway, they let us off and went on their way but we did this for about a year and a half and we met, at that time the literary community was really small so you could have a sense of virtually knowing everybody in the English language community.

So at that point we were looking around for storefronts and being torn about whether we should really look for a storefront or just find one. One day I came out to walk the dog and the building where (The Word Bookstore) we are, was a Chinese laundry and the sign said: for rent.

That was just a no brainer, this has to be the thing to do. So we went in there and things were a lot easier in ‘75, the rent was $175 a month and we were selling books outside for 25 cents, books shelved alphabetically on the shelf in alphabetical order were 35 or 40 cents… it was easier times.

We continued the poetry readings and we also did some publishing. We published, along with Fred Louder, some fine press editions and Brian McCarthy was also a poet then. He lived on Saint-Laurent just above where the grey stones are, the monuments, and he was moving to Europe and I managed to buy his poetry collection, which was a spectacular achievement for somebody starting out. I managed to get his Gestetner machine because a lot of things in the 70’s were produced on Gestetner. So we started Gesterner-ing author stuff. This one (holds up a stapled set of sheets) is a short story by a friend of mine, Wayne Grady. This we sold for 35 cents. 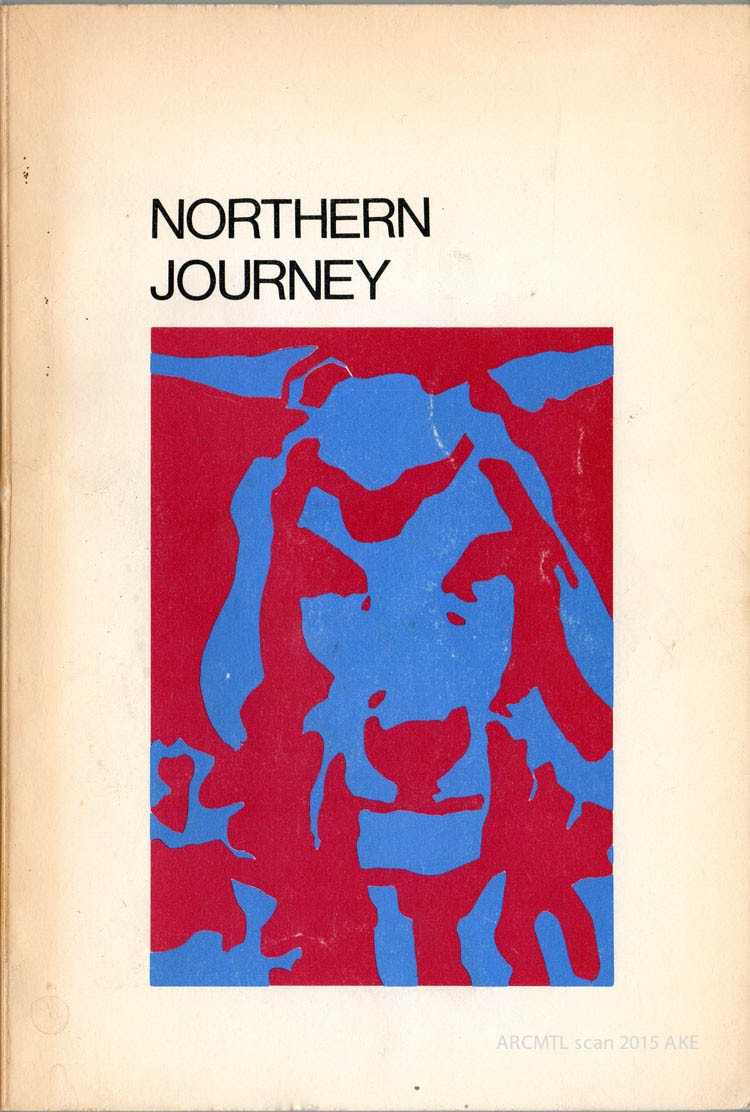 Northern Journey, from the collection of Adrian King-Edwards

LR: Just to clarify — a Gestetner is a hand-cranked cylinder press and you would type out pages on a typewriter and just make copies from it.

AKE: Yes, and we did some fun broadsides like this. This one is Guy Berchard, who now lives in Victoria; Laurence Hutchman, really nice, one of my favourite poems, The Chinese Man. I’ll show them all to you after if you are interested—here are things Fred Louder did. One of my greatest disappointments was that Fred Louder who did such magnificent work on his press moved away and I had foreseen working with him for quite a long time. And here: five jockey poems by Artie Gold.